This Could Be A Problem 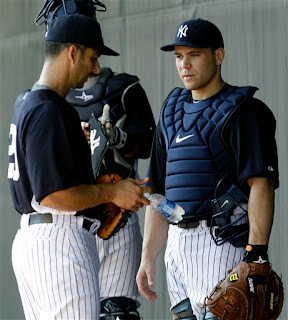 ("They called me Mr. Glass."  Courtesy of The AP)
Via LoHud:

"Joe Girardi said he does not expect Russell Martin to be behind the plate for Saturday’s spring opener.

Martin’s hip is fine, but his knee is still stiff and the Yankees don’t want to risk a setback. They still expect him to be 100 percent at some point this spring, they’re just moving slowly."

Great.  A starting catcher who can't catch.  He's not 100% healthy right now so they don't want to risk him playing the toughest position in terms of maintaining physical health yet.  But once he reaches that 100% level, then it's all smooth sailing and he won't suffer any setbacks after he starts playing the position every day.  Have I got that right?  Maybe it's time to rethink those CAIRO projections for Martin.

Should I be concerned about this yet?
Posted by Unknown at 4:11 PM No comments:

Here's 3 things I take from it:

1) Freddy Garcia is almost guaranteed a spot as the 4th or 5th starter to open the season.  For a guy with diminished stuff, league average at best numbers, and who's in camp on a non-guaranteed Minor League contract, the Yankees certainly seem to have a lot of faith in Garcia based on his "innings eater" reputation and past performance against them.  How else do you explain him being the last one to pitch in ST?  For a guy whose contract doesn't guarantee him a spot on the team, I would want to get a good look at him quickly to start formulating an idea of what he can offer and whether or not he's worth keeping around.  The fact that he's throwing after the other guaranteed rotation guys says to me that the Yanks have already decided to keep him around, at least for now.

2) The other rotation spot competition is just between Colon and Nova.  They are the first 2 pitch and so become the 2 with the most to prove.  It will be just like Joba-Phil last ST, except that this young guy is younger than Hughes and the fat guy is fatter than Joba.  I still don't see any way Colon gets a spot in the rotation out of ST, but the Yanks are determined to give him a real shot.

3) The Meat Tray is out.  No Sergio in the rotation means no shot for him and his groundball wizardry to show what he can do.  I can live with that, as now Mitre falls back into his role of long reliever in the bullpen, effectively rounding out that solid crew, and becomes the emergency 6th starter again.  But still, a bit of a tough pill to swallow for a guy who was penciled in as the 5th starter a few weeks ago and not gets bypassed for a big fat slob who threw a few decent innings of Dominican winter ball and probably will require a double bypass some time this season.
Posted by Unknown at 12:56 PM No comments: