The Yankees' activity on the free agent market has slowed way down since the Carlos Beltran signing.  Sure, they added Brian Roberts and Matt Thornton this week, but their involvement on the starting pitching market has been non-existent with things held up on the Masahiro Tanaka front and now it sounds like the plan to stay under the $189 million luxury tax threshold is back on again.  Via Joel Sherman's Thursday column:

That comment was made in the context of talking about Alex Rodriguez's suspension, but it still doesn't make a lot of sense to me.  The Yankees have spent a shit ton of money this offseason, enough money to put themselves right on the ragged edge of going over that 189 number.  They've done a solid job of trying to reload the team on the fly but there are still some major spots that need to be addressed.  To not stay fully committed to that and to go super cheap to avoid the luxury tax in the event that A-Rod isn't suspended for the whole year is stupid and makes the rest of their big offseason moves relatively pointless. 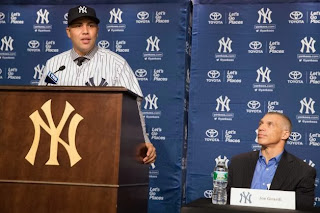 Carlos Beltran got to fulfill what had to at least be a small life goal yesterday when he became the latest, but hopefully not the last, Yankee free agent acquisition to meet the media.  As expected, flowers were presented to wives, pictures were taken, questions were asked.  Here are the highlights:

- Beltran said "I used to look up to this organization" when talking about his long standing desire to be a Yankee.  He confirmed that he grew up a Yankee fan and specifically mentioned Bernie Williams as a player he was a fan of.  That's pretty cool.

- Both Joe and Cash talked about the flexibility Beltran brings to the lineup as another switch hitter to add to the mix.  It'll be interesting to see how Joe decides to lay out the middle of the batting order with all these new faces.

- Apparently the wound from his time with the Mets hasn't fully healed.  Beltran said that he thought "it wasn't right" how the team portrayed him at times, especially when it came to leaks from within the organization.  He did later say that if he made the HOF he would strongly consider going in as a Met though, so he can't be too upset.

- We knew this already from a tweet of his weeks back, but Beltran will wear David Cone's old #36 next year.  And he will play right field.

- Beltran on the team's chances next year: "With the signings of Ellsbury, McCann, myself and the players that we have, I believe that we have a good (enough) team to go all the way. We still have to go out there on the field and perform, but most importantly, we feel that we have the players – the characters – to accomplish that.”