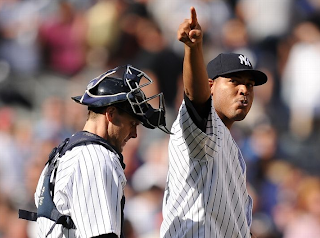 If they wanted to keep their faint glimmer of playoff hope alive, the Yankees needed to start pitching better.  They got a much improved 7-inning/1-run performance from CC Sabathia on Friday night and Ivan Nova following suit this afternoon would have been a huge boost.  They can't continue to roll with just Andy Pettitte as the only reliable starting pitcher.  Nova could help his stock for 2014 as well with a good start, and that stock is even more important now that we know Andy is retiring.  Ivan did answer the bell, and did one better by outdoing what Sabathia did last night and completely shutting down the San Francisco lineup on the way to the Yankees' second straight win.

- Outside of a fastball over the plate to Pablo Sandoval, Nova looked pretty good through the first 3 innings.  He was getting ahead with his fastball, locating down in the zone to get a lot of groundball outs, and didn't put a run on the scoreboard.

- A pair of singles and a 4-pitch walk from the 7-8-9 hitters put the Yankees in business with no outs in the bottom of the 3rd.  They brought all 3 runs around to score on an Ichiro sac fly, an Alex Rodriguez RBI groundout, and a Robinson Cano RBI single to give Nova a cushion.

- That cushion got bigger and softer in the bottom of the 4th when Eduardo Nunez yanked a hanging curveball down the line and into the left field seats for a 2-run HR.  His lack of power development is one of the things that has made him such an extreme negative WAR player, but he showed some on that swing.

- Nova gave up a leadoff, sun-aided double to start the 4th, and then he was in full command for the remainder of his outing.  That runner never moved from second base, Nova retired the next 8 batters in a row, and punctuated his 8 scoreless with 2 strikeouts to strand another runner.

- Another Alfonso Soriano home run tacked on another run, and Nova finished what he started with another swinging strikeout at a nasty curveball.  2 games, 2 wins, and a stocked bullpen to support Andy tomorrow. 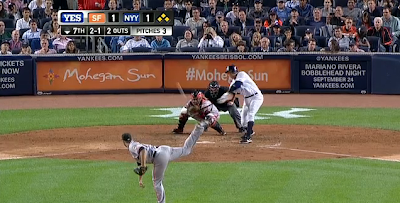 Like 100% arms.  No lower body in that swing at all.  And still strong enough to hit it well out to become the new all-time MLB leader in grand slams.  Guarantee Bud is trying to figure out a way to add 50 games to his suspension for reaching that milestone.

"But wait, Brad.  I thought centaurs didn't have arms.  How did he do that?" 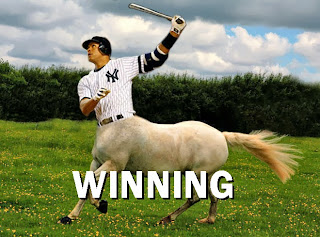 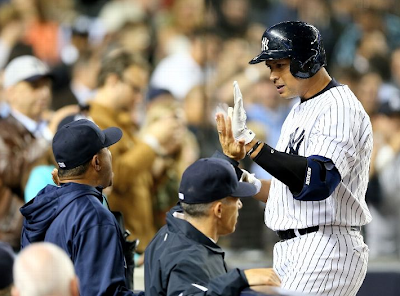 As recently as 2011, if your buddy told you he had tickets to watch CC Sabathia and Tim Lincecum pitch you would have been pissed that he didn't you.  Today, you'd probably come up with an excuse to not watch Sabathia and Lincecum pitch if he did invite you.  It's been a quick transition to below-average for these 2 former Cy Young winners, and the jury is still out on whether either of them can or will turn it around going forward.  They were getting the ball for their teams last night to start Mariano Rivera's final homestand, and CC could have given him a going away present with a vintage Sabathia outing.

- The Yanks got on the board early with another Alfonso Soriano home run.  He went the other way to lead off the bottom of the 2nd and parked one over the short fence in right.

- Sabathia danced around a pair of baserunners in each of the first 2 innings, but couldn't erase a leadoff walk in the top of the 3rd.  Juan Perez doubled in a run on a poorly-located sinker and the game was tied at 1.

- Both Sabathia and Lincecum settled themselves down after the 3rd and kept the game tied into the 7th.  They each gave up a hit here or a walk there, hardly the type of dominance they used to display on their best days, but 1 run in 6 innings from these guys these days is a big deal.

- The Yankees set themselves up nicely in the bottom of the 7th with an Eduardo Nunez single and stolen base, a Brendan Ryan HBP, and a big 2-out walk to Ichiro.  Alex Rodriguez strode to the plate, bad legs and all, to face former Yankee prospect George Kontos.

- Kontos threw him 4 straight fastballs and A-Rod timed up the last one just right to hit it out of the park to right-center and give the Yanks a 5-1 lead.  If they were still seriously in the playoff race, it would have been the biggest hit of the year by far.

- With a 4-run lead in the late innings, Joe went to his bullpen horses.  David Robertson coaxed a double play ball to start the 8th and struck out Buster Posey to end it, and Mo went 1-2-3 in the 9th without the ball ever leaving the infield.