A Tale Of 3 Offseason Approaches 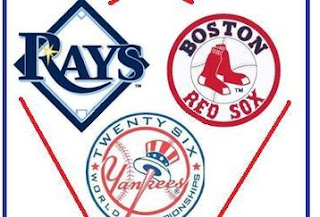 While we all sit and wait for the winter meetings to play out and everybody to make their respective moves, one thing is for certain:  We are going to be looking at a drastically different AL East next season and the 3 main competitors are all going about that change in very different manners.

The Yankees, like last offseason, are focusing on their one glaring need (starting pitcher Cliff Lee), then re-signing their own legacy free agents to ensure they stay in pinstripes and looking to fill the roster out with a bit piece here or there (second bullpen lefty, bench depth, possible cheap reliever).   Sure they gave Jeter too many years and too much money, but we all knew that was going to happen.  And with the rest of the lineup set with guys either in their prime or still performing above league average, there's not much cause for the Yankees to get involved with big names other than trying to drive up the price on Boston.

The Red Sox have abandoned last season's plan of pitching and defense (because we all saw how well that worked out in 2010) and instead are focusing on completely revamping the lineup.  Out are Adrian Beltre and Victor Martinez (and some high-level prospects) and in are Adrian Gonzalez and possibly Carl Crawford before it's all over.  Their bullpen is still a mess and the top of their rotation has now seemingly flip-flopped to the bottom as Lester and Buchholz are clearly better than Beckett, Lackey, and Dice-Gay, but there will be a little more pop in the lineup in 2011 to be added to to their group of returning All-Stars.

The Rays, with the shallowest pockets and most players leaving, have focused on trying to get the most for all their departing free agents, and look like they'll be rewarded with a substantial cache of high draft picks for all the arbitration offers they made to their Type-A and Type-B guys.  It's no secret that they built their successful team over the last few years through consistently high draft picks, and they've shown the ability to scout talent, so it's not a bad approach to try to replace what they've lost this offseason.  Consider the fact that they still have a decent amount of talent, solid starting pitching, and new guys like Desmond Jennings and Jeremy Hellickson ready to contribute full time in 2011 and it goes without saying that the Rays will still be in the mix.

On top the big 3 taking their approaches, the other 2 teams in the AL East aren't just sitting back either.  The Orioles added HR machine Mark Reynolds earlier today, and the Jays are making deals to possibly make a run at trading for Zack Greinke.  We're a little less than 4 months away from the start of the 2011 season and it's already shaping up to be another highly-competitive year in the best division in baseball.
Posted by Unknown at 3:48 PM No comments:

You might very well be a better GM than Omar, and you almost certainly can't be any worse, but I don't think it would be wise to run your mouth about the Jayson Werth deal when you look at some of the contracts on your club.

"It makes some of our contracts look pretty good.  That's a long time and a lot of money. I thought they were trying to reduce the deficit in Washington."

Kudos to the dig at the government, friend-o, but which contracts of yours' does Werth's $18mil/year make look good?  Would that be Jason Bay's 4-year/$66 million deal for which the Mets received 6 HR, 47 RBI, and a .749 OPS last season?  Or maybe Oliver Perez's 3-year/$36 million deal that resulted in a 6.80 ERA, 2.07 WHIP, and .293 BBA in just 46.1 innings of work last year?  Not those?  How about the $12+ mil you're going to be paying a declining K-Rod in 2011 to continue to decline and possibly punch out another family member?  Or the $18 mil you'll give Carlos Beltran in the final year of his deal to probably play no more than 80 games because of injury and put up sub-par numbers when he is on the field?

Bottom line, Sandy, is that as overpriced and too long as Werth's deal with the Nationals is, you're still talking about a player who has averaged over a .900 OPS and 135 OPS+ over the last 2 seasons and been worth 12.6 WAR over the last 3.  Dude is in the prime of his career and is far more productive than any of the guys that you'll still be paying 8 figures to in 2011.  I know you've got big plans for fixing the Mets, but you might want to let some of these horrible deals end and make a few good ones of your own before you start criticizing others.

Leave the shit talking to somebody who actually deserves to be talking shit.
Posted by Unknown at 10:45 AM No comments: