Some Not So Fun Yankee Facts

- For the season, their team batting line is now down to .239/.301/.379 (.297 wOBA, 83 wRC+).  If the entire Yankee offense was one player, they would be Drew Stubbs.  That sound you hear is this team's ship sinking.  Something needs to change with the construction of this roster and it needs to change soon.
Posted by Unknown at 10:06 AM No comments: 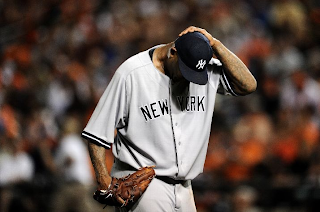