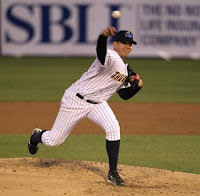 Marshall has decent size at 6'0"/195, and generates a ton of velocity on his 2 different types of fastballs he throws.  His 4-seamer sits mid-90s and can touch the uppers at times, and his 2-seamer sits low-90s with plenty of movement in on right-handed hitters.  He also throws a hard slider with a lot of late movement and is in the early stages of developing a curveball.  With a repertoire like that, it's easy to see why the ceiling is high for Marshall.  He has decent control of his stuff right now, but a 3.08 BB/9 in 2011 suggests that there's still plenty of room for him to tighten up his command to become even more effective.  Like D.J. Mitchell, Marshall hasn't been pitching for very long, so his approach on the mound and mechanics aren't totally refined.  As he continues to learn the nuances of pitching, the opportunity is there for Marshall to develop into a top-tier pitcher.  There are some openings in the Double-A rotation after the promotion of the Killer Bs late last season, and I would expect Marshall to get bumped up and fill one of those spots in 2012.
Posted by Unknown at 1:00 PM No comments:

Update For The Rest Of The Year

OK, people.  Here's the deal.  I've got 15-11 going up this afternoon for the continuation of the AB4AR Top 30, but I'm heading up to Bahhston for New Year's with my buddies so that's the last you'll be hearing from me in 2011.  I know, I know, it's enemy territory.  How could I betray my own Yankee fandom like that?  But no worries.  I'm loaded to the gills with Yankee clothes and will be wearing my new Yankee hat with pride all weekend, so rest assured.

I'll be back in writing shape some time on Monday, January 2nd when I get back out to Wisco, so the plan is to pick up the Top 30 then and finish it out with the unveiling of the Top 10 on Monday and Tuesday.  And then from there we'll focus on moving forward towards pitchers and catchers reporting.  So from me to you, have a happy and safe (and hopefully like me, hammered) New Year's Eve and I'll see you on the other side of the calendar change.
Posted by Unknown at 10:31 AM No comments: