The announcement of the Mark Teixeira injury was the latest blow in the battle between the baseball gods and the health of the Yankee players, one that will leave the lineup even shorter and less flexible than it already was with Teix still active.  The Yankees made a move to add Steve Pearce to the roster yesterday, but that's hardly enough to make up for the loss of Teix in the middle of the order.  A post by Mike Axisa on RAB yesterday on how the Yankees can go about managing the lineup with Teix and A-Rod out caught my attention, in particular Mike's idea of just playing to the platoon splits:

"With Teixeira out of the lineup, the Yankees would have four players for four spots against righties — Dickerson, Ichiro Suzuki, Raul Ibanez, and Eric Chavez. Chavez has to play third and Ichiro an outfield corner; that’s the easy part. Having Dickerson around allows them to keep Ibanez at DH and put Dickerson in the other outfield corner while the switch-hitting Nick Swisher plays first. Against lefties they would have Andruw Jones, Casey McGehee, Jayson Nix, and the recently-acquired Steve Pearce for those same four positions: Jones at DH, McGehee at third, Nix in left, and Pearce at first with Swisher in his usual right field."

It's not ideal in the sense that there will be a lot of guys not getting regular at-bats, but with the collection of slightly-below to slightly-above average platoon hitters the Yankees have at the moment, it's probably the best option to maximize the lineup's output potential.  If you'll allow me a moment to put on my manager pants, here's how I would build off of Mike's suggestion and create the 2 platoon lineups.
Read more »
Posted by Unknown at 12:30 PM No comments:

The biggest talking point from last night's stellar 1-run outing by Phil Hughes was his introduction of a new/old pitch to his repertoire.  The Yankosphere and PITCHf/x are calling it a slider, and it damn sure looks like one...

... but via his postgame comments last night, Hughes himself is referring to it as a slider/cutter combo, bringing back together the pitch he abandoned earlier this year and the pitch that he abandoned far longer ago when he was still in the Minors.  The pitch certainly appears to slide more than cut, but if Phil is saying it's both then who am I to argue?  Plus, if it slides and it cuts then there's already a perfect name for it.

Thank you, thank you.  I'll be here all week.

Posted by Unknown at 9:06 AM No comments: 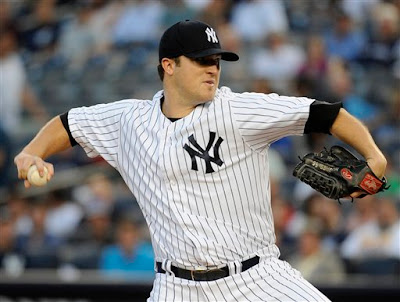 - The bullpen needed a rest, which Hughes gave them with his 7 strong innings, but Joe pushed for the win by going to the D-Rob/Soriano well for the third straight game.  They got the job done, in perfect fashion, to secure the win and likely ensure that we won't see either of them today.
Read more »
Posted by Unknown at 7:10 AM No comments: