Well that's one way to make a statement about the recent poor play from the front office.  The Yankees announced 2 25-man roster moves in preparation for tonight's game.  Alfredo Aceves has been designated for assignment and replaced by lefty Wade LeBlanc, who was claimed off waivers yesterday.  Also removed from the Major League bullpen was Preston Claiborne, who was optioned down to Triple-A SWB while Jose Ramirez was called up.

The writing was on the wall for Aceves after the LeBlanc claim went through.  He had pitched terribly ever since his scoreless 5-inning first appearance and there was really no use for him anymore.  The Claiborne move comes as a bit more of a surprise.  It's not undeserved on his part.  He had given up 4 ER and 4 BB in his last 5 appearances.  But Ramirez has only recently come off the MiL DL and only has 7 relief appearances under his belt for the RailRiders.

Both good moves for the Yankees.  They remove 2 guys who had given up 21 ER in 37 IP and replace them with a versatile left-hander who can be LOOGY insurance for Thornton and a high-ceiling power arm who's been striking out over a batter per inning in Triple-A.  The fun part will be seeing if these are the only roster shakeup moves made.
Posted by Unknown at 4:16 PM No comments:

The Looming Albatrossity Of CC's Contract 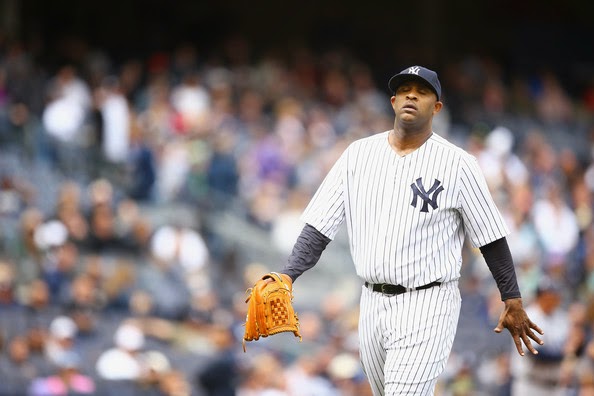 After a rough patch there for the better part of the last 2 weeks, it looks like the Yankees' injury fortune may be changing for the better.  They could get Carlos Beltran back by the end of this week, maybe Shawn Kelley next week, and Francisco Cervelli has been playing in ExST games.  Michael Pineda's latest setback wasn't the worst case scenario, so there's still hope that he can come back and help at some point, and Mark Teixeira returned from his latest bout of wrist inflammation to go 2-5 with a HR and be the only player in the lineup responsible for driving in runs last night.  Everybody (knock on wood) seems to be coming around nicely.

Except for CC Sabathia.

Wednesday Morning Food For Thought: How Bad Have The Yankees Been Against Left-Handed Pitching?

Joe took a big swing at his lineup last night to try to get some offense going.  He loaded up on right-handed bats against southpaw starter Scott Kazmir, inserting John Ryan Murphy and Scott Sizemore into the lineup for Kelly Johnson and Brian McCann, and giving Brendan Ryan a night at shorstop while The Captain DH'd.  The results weren't there again (2 runs and only 1 XBH against Kazmir), and it made me wonder if the Yankees just stink against lefties this year.  Have they been so bad that it necessitated all the moves Joe made?

Not really.  As a team, the Yankees have a .716 OPS against LHP this season.  It's not great by any means, but at 17th in MLB it's hardly the worst in the world.  The Yanks have actually been worse against right-handed starters with a .697 team OPS and an 18-19 records against them compared to 11-9 in 20 games against lefties.

There's certainly no harm in changing things up when your team isn't hitting, and with somebody like McCann I have no problem with Joe using the L/R matchup game to give him a day of rest.  Production against southpaws has not been the Yankees' biggest problem this year, however, and Joe might be better served tweaking his batting order against righties (coughcough, move Jeter down, cough cough!!) to help pull his club out of this offensive funk. 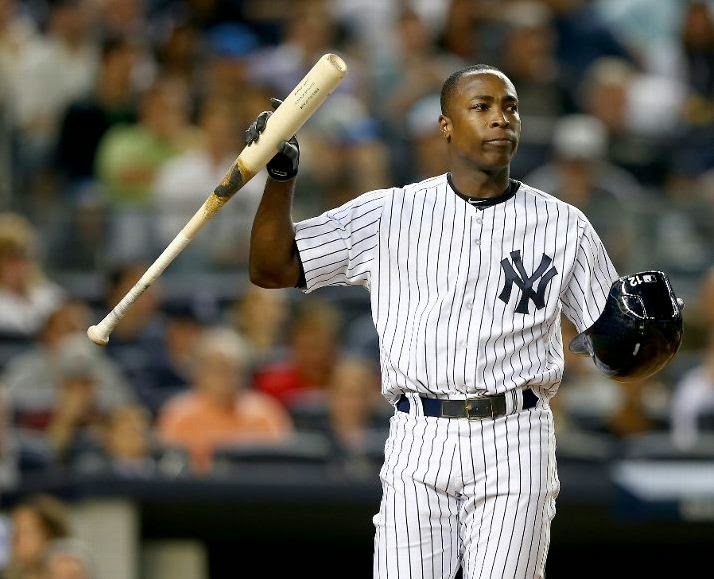 It's been a rough handful of games recently, so Joe decided to shake things up for last night's series opener against the Oakland A's, arguably the best team in all of baseball.  He had Scott Sizemore in the lineup at third base against the lefty Scott Kazmir, John Ryan Murphy too behind the plate, and for once he had Brendan Ryan starting at shortstop to help GB-heavy starter Hiroki Kuroda.  He also had Mark Teixeira back in the lineup after a few more days off to rest his ailing wrist.  None of it helped, as the Yankees failed to crack the 3-run barrier for the 5th time in 7 games.

- Naturally it was the untweaked guys who gave the Yankees their first run.  Brett Gardner, Jacoby Ellsbury, and Teix all singled to maufacture a run against Kazmir in the bottom of the 1st to grab the early 1-0 lead.

- Hirok breezed through the first 3 innings by mixing his pitches well.  He was getting called strikes on early offspeed pitches, locating his sinker down in the zone, and got help from Ryan turning a double play to eliminate the 1 hit he gave up.

- Kuroda's sinker started to drive up in the middle innings, however, and the A's cashed in on that in the 5th when Brandon Moss hit a game-tying home run on a 3-2 sinker that was up and over the plate.

- That 1st inning run loomed large for the Yanks because it was all they sniffed of scoring into the 6th.  Kazmir struck out the side in the 2nd, dominated Alfonso Soriano, and didn't give up another hit through the 5th.

- When he did flinch again, it was against Teix in the bottom of the 6th.  Kazmir missed with a 2-seamer for ball 1, tried to throw another one by Teix, and watched as Teix smashed it to left-center for the go-ahead HR.

- Kuroda handed the game over to Dellin Betances with 2 outs in the 7th.  Betances promptly struck out Moss but had an uncharacteristic hiccup in the 8th with a walk and a 2-out double to tie the game.  The offense couldn't generate another run late and the game went into extras.

- Moss didn't need long to get over the 7th inning K.  He came up to face Adam Warren to lead off the 10th and crushed his second dinger of the night into the right field seats.  Warren fell apart from there and the lineup couldn't muster up a rally in the bottom half.