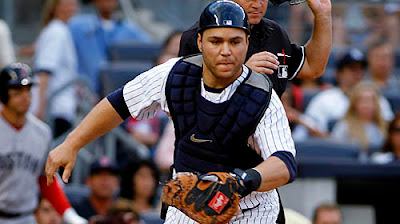 Well that was an interesting turn of events last night, wasn't it?  Less than a week after it was reported that he was "willing to wait" for the Yankees to make him an offer before looking at other teams, Russell Martin signed a 2-year/$17 million deal with the Pittsburgh Pirates, who were only introduced as a serious candidate for his services earlier this week.  The bulk of the talks involved bigger-spending teams like the Yankees and Rangers, but shockingly enough it was Pittsburgh who swooped in and got the job done.

Even more shocking were the multiple reports from Yankee beat writers that the Bombers didn't even make a contract offer to Martin, who was easily the best all-around catcher available on the market.  The internal crop of Yankee catching options was and still is woefully thin on depth and talent, and the Yankees had to be keenly aware that the rest of the available free agent pool was very shallow, and yet they still chose to put re-signing Martin off to hammer out deals with guys like Pettitte and Mo who were never going to play anywhere else but New York next season.  It's a very puzzling strategy and move by the Yankees, one that I'm still having a hard time formulating a complete response to.  So in classic AB4AR fashion, I'll just throw it all out there in some bullet points.

- I brought this up on the daily TYA email chain yesterday as a knee-jerk reaction and I still believe it's true this morning.  Looking back, Martin was gone the minute he turned down the 3-year/$20 million offer before this past season.  If he played any better than he did in 2011, he would have priced himself out of New York's range.  If he played any worse, they weren't going to make him a better offer.  That deal was a one-time offer and it was made at the only time the Yankees were willing to make it.

- To not even make a counter offer suggests that the Yankees know something about Martin that we don't.  Austerity budget or not, he was the best catcher available, had familiarity with the team, and would have come at a team-friendly price.  I don't know if it's something physical or concern about his skills, but insider info is the only thing that explains to me why they wouldn't even make an offer.

- While we're on the topic, I think this is the biggest piece of evidence yet that the $189 million budget for 2014 is very real.  You don't let good 30-year-old catchers who can be had on a 2-year deal walk unless you are really committed to getting under that threshold and really believe signing him would have made that goal impossible.

- This is also a sign that the Yankees really are going to stick to nothing but 1-year deals for the next 2 offseasons, which is going to make them really boring and probably cause some changes to the way other teams and players approach their offseason plans.

- I doubt they will ever come out and say it publicly, but this is also a sign from the Steinbrenners that they are willing to take a competitive hit to get under the payroll ceiling.  There's nobody internally who's going to be as good as Martin was, and for now the Yankees are basically signaling that they're willing to live with below-average performance from the catcher position.

- From a fan's perspective, let me just say that if David Waldstein's report that the Yankees told Martin they "didn't have the cash to match" the Pirates' offer is true, then fuck the Steinbrenners.  You just finished your deal with News Corp., everybody knows how much you stand to make off of that, and everybody knows you're already raking it in.  If it's because of the payroll budget then just say that.  But don't slap us all in the face by telling us you don't have the money.

- As far as backup plans go, I honestly have no clue what the Yankees are planning on doing.  Napoli and Pierzynski are bad fits for their team, and there aren't exactly a plethora of young, good, cost-controlled catchers out there on the trading block.  If you had to pick a starter today, I'd say it's Frankie Cervelli.

- Part of me wonders if maybe this was a cost-savings move to add a little money to the right field fund.  There are still a few players out there who make a lot of sense for the Yankees, but most of them would want multi-year contracts.  And if you're willing to shell out for 3-4 years of a good outfielder, why not 2 for a good catcher?

- I will say this, if the Yankees really are planning on doing nothing but 1-year deals, at least they're going about it the right way.  Pitching was their biggest need and they stayed focused on that need and addressed it first before doing anything else.  You can never have enough of it, and the Yankees made sure they got what they wanted.

- In the end, you can't really blame Russ for the decision he made.  He sat by and waited this last month for the Yankees to engage him, said all the right things, and made it clear that he wanted to stay.  Pittsburgh made him a good offer, probably the best one he was going to get in terms of AAV, and when he went back to New York they declined to make him an offer.  The Yankees would have had to go to 3 years/$27 million to beat Pittsburgh's offer, a big step up from the money they offered previously, and they weren't willing to do it so Russ went with the best deal he could get.  It's a business for him just like it is for the front office, and he made a smart business decision.
Posted by Unknown at 7:38 AM

Unless he completely craps out in ST, I would expect him to go north on opening day. At least as a backup. He'll have several excellent tutors on the big club.

As for Martin, he can take his anemic batting average to Pittsburgh. A catcher hitting below the Mendoza Line?

I just don't think it's that big a deal. And if I read Cashman's comments correctly, he's got something up his sleeve that we'll be hearing about around Christmas, AND he believes that he can get anybody to catch the staff he's putting together.

The opportunity is certainly there for Romine, but he's going to have to have one helluva spring camp to make the 25-man after how his 2012 went down.

And yes it was low, but batting average is the worst way to assess Martin's value. For the sake of comparison, Napoli only hit .227 last season and can barely catch. Martin's a valuable player and is going to be tough to replace.

I certainly hope Cash has something else in the works because there's nothing in-house that is acceptable as an everyday starting option.