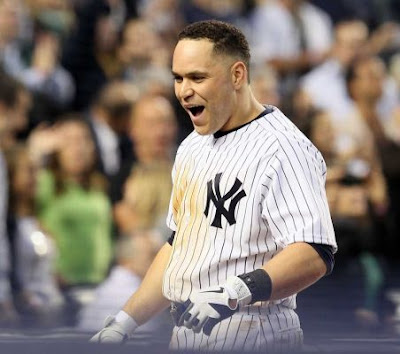 Anthony McCarron of The Daily News reported on Sunday that the team and Martin's agent have already talked and that, "it was all very positive."  Nobody is close to putting pen to paper yet, but the fact that talks are starting this quickly shows there is desire on both sides to have Russ remain in a Yankee uniform next year.  Checking the rest of the backstop landscape this offseason, that's the best move the Yankees can make to address their catching situation.

Internally, the Yankees don't have anybody capable of stepping in and filling Martin's shoes should he decide to walk.  Chris Stewart and Francisco Cervelli are not everyday Major League catchers, and it sure doesn't seem like newest Yankee Eli Whiteside is either.  Austin Romine isn't ready for full-time duty after missing a huge chunk of this season, and Gary Sanchez is still years away from taking the job.  All indications are that the team didn't lose much in terms of catching ability by giving up Jesus Montero, but the void he created between Martin and the next group of potential in-house catchers is still a very wide one.

Outside the organization, there isn't much to get excited about on the free agent or trade market.  A.J. Pierzynski turns 36 next month, is coming off a career year driven entirely by what appears to be a freak spike in power, has never been a great defensive catcher, and is a notorious asshole.  Mike Napoli, appealing as his offensive numbers might be, played in just 108 games last year, caught just 72, and has never caught more than 96 in a season.  The last thing the Yankees need is to create another full-time platoon spot in their lineup.  Brian McCann is an interesting possibility, even after Atlanta picked up his option, but he would cost prospects in a trade and is coming off shoulder surgery.  And while David Ross is the hot new name on the scene, I'd be very wary about handing a starting job to a 36-year-old career backup who has only played more than 100 games in a single season once in his career.

So back to Martin.  Yes, as a whole his 2012 season wasn't a successful one, but there are plenty of reasons to believe he can and will have a better year in 2013.  His 21 home runs were a career high and right up there with the best catchers in baseball, so there's clearly still life in his bat.  And it's not too hard to connect the dots and see there was some serious bad BABIP luck that affected him all season.  .222 is too low by any standards, and when that number did start to normalize towards the end of the year (.271 in September) so did Martin's batting line (.258/.347/.539).  Martin is still a good defensive catcher, he's got good rapport with the pitching staff, by all accounts he's a great clubhouse guy, and he's a pretty damn tough dude.

If there was a truly better option out there, I would be in favor of pursuing it.  But there isn't, not one that is significantly better than the whole package that Martin offers.  He's been relatively healthy in his time as a Yankee, he's been productive, and he's a great fit with the rest of the roster they've constructed.  Get a new deal done with him, preferably another 1-year job with an option for 2014, and check another thing off the offseason To-Do list.
Posted by Unknown at 10:00 AM