Not including Bucker's ball through the legs, have there been 2 worse defensive plays in World Series history than Pete Kozma's dropped double play toss and Wainwright and Molina's dropped infield pop-up in Game 1?  Sweet fancy Moses, people, somebody wake up and make a fucking play!  Buck and McCarver did their best to make excuses for Kozma having to come from the other side of the bag, but the bottom line is the guy dropped an easy ball.  No reason to take your eye off it to check on the player sliding into you, dude.  Not when that player is 4-foot nothing Dustin Pedroia.  And shame on Wainwright for calling everybody off and then not making the catch and double shame on Molina for running all the way out to the mound like a jackass and distracting him.  Good thing they made up for it with a win last night.  I hate bad baseball.  Now onto the links!

- On Monday, el duque of It Is High... submitted his list of ways to improve the Yankees in 2014 and beyond.

- SG of RLYW did the same, stressing the importance of building a team that could contend beyond 2014 instead of just signing flashy names to big deals (Beltran, McCann) or repeating the 2013 approach of signing names whose flash had already worn off.

- SJK of NoMaas reiterated his belief that the Yankees missed an opportunity by not trading Robinson Cano at the deadline this year.

- On Tuesday, Joe Ferraiola of IIATMS/TYA broke down the Jurickson Profar-for-Cano trade that never was and gave hist thoughts on whether or not the Yankees missed an opportunity there.

- Chad Jennings of LoHud had the most details I've seen on the mysterious A-Rod legal team press conference that got Taffered before it could happen.

- On Wednesday, Greg Corcoran of Bronx Baseball Daily went back over the last 6 Yankee drafts and updated the progress of each player, signed and unsigned.  Hell of an effort by Greg, and the results are as depressing as you'd expect.

- Mike Axisa of RAB posed an intriguing and not often talked about trade possibility to address the potential hole at third base next season.

- Michael Brown of Pinstriped Bible mused on some ways the Yankees could bring the "evil" back to the Evil Empire next year.  His post was meant to taken somewhat jokingly, but he may be onto something.  It would be nice to see a little attitude back in the team.  They've become very boring.

- On Friday, Daniel Burch of The Greedy Pinstripes looked ahead to 2014 and what kind of production we should expect from the returning Mark Teixeira.  30+ homers and 100+ RBI would be nice.

This Friday's jam is one from the treasure trove of awesome cover songs that is Richard Cheese and Lounge Against the Machine.  If you aren't familiar with Mr. Cheese, he takes popular rock, rap, and top 40 songs and remakes them as Vegas lounge music.  A song of his came on my iPod a month or so ago when my girlfriend was in the car and I was shocked to find out she had never heard of him.  Damn near stopped the car in the middle of street.  She'll never know how close she came to getting kicked out of the car right there on the spot.

(Still my favorite image of the season)

Well we made it.  We've come to the end of the 3-week season review extravaganza, and I don't know about you readers but I've been exhausted by it and I'm glad it's over.  We finish it off, as always, with a review of my preseason predictions and some honest self-reflection about my skills as a baseball prognosticator.  Admittedly, my track record in making season predictions is not a sparkling one.  2011 was a tough year, 2012 even tougher.  I honestly didn't even go back and recap my 2013 predictions post before I started writing this and there's no way I could remember them all off the top of my head, so this should be interesting.  Here we go... 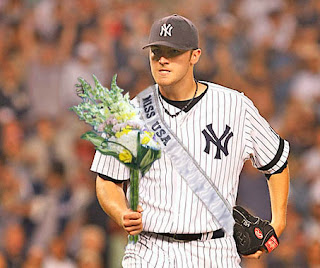 I'm short on ideas today so I'm going back to an old standby, Mr. Phillip Hughes.  It probably seems pointless to talk about Hughes in relation to the Yankees anymore.  He very likely pitched himself out of contention for even a qualifying offer from them let alone a new multi-year contract offer, and his reputation as the organization's biggest developmental pitching flop would make it very difficult to bring him back with any expectations of success.  The Yankee have already set their sights on a bunch of other free agent targets. Time spent considering Hughes as part of that mix would be time wasted.