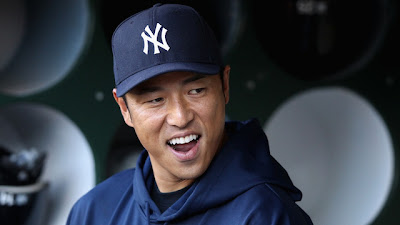 ($15 million would bring a smile to your face too.  Courtesy of the AP)

He's another old guy, but he's a productive one and one who actually made sense to bring back, so Hiroki Kuroda re-upping for another year yesterday was a positive first step for the Yankees yesterday after an early offseason of mostly inactivity.  There's still a lot to be done, and still plenty of opportunities for people like me to complain about them only targeting guys 35 and over, but Kuroda was the most important player to bring back and now that's been done.  Hopefully this a sign that Cash is going to start moving and shaking a little more heading into the Winter Meetings, and he's still got plenty of time before then to work out new deals with Mo and Andy and free up his time at the meetings for perusing the trade market.  By my count, here's how the updated to-do list should look:

Mo Back On The Mound

Well, sort of.  It wasn't even close to a game situation, and I'm sure he wasn't painting the inside corner with the cutter there, but at least it's something.  He had to be pushing off in some capacity to shoot this ad, so that's a good sign for the health and progress of Mo's knee as he gets ready to come back next season.

It's easy to forget that Mo is still not officially a Yankee.  As we live and breathe right now, he's still technically a free agent, although the situation is an obvious "Yankees or nobody" one for the G.O.A.T.  We were told a few weeks ago that the re-signing process would be a quick one after he formally declared that he wanted to come back, but so far no progress has been made outside of the Yankees stating that their offer would include a paycut.  You have to think with Hiroki Kuroda re-signing late yesterday that getting Mo to do the same is the next on Cash's to-do list.

P.S.- Definitely just put that cologne on my Christmas list.  Always good to smell like a champion, right?

Posted by Unknown at 6:53 AM No comments: