Phil Hughes Is Going To Get In Shape Now

Via Andrew Marchand at ESPNNY:

"Phil Hughes didn't show up to spring training grossly overweight last February, but he'd packed on enough pounds to end up in what the New York Yankees call "fat camp." It is for players who need to up their conditioning a bit to ready themselves for the season.

With 2012 spring training now less than 100 days away, Hughes is reverting to the workout program that preceded his All-Star 2010 season, which makes Yankees GM Brian Cashman think an uptick in Hughes' performance will follow.

"I think in 2012, you are going to see that again.  He is determined. He is going to Athletes' Performance out there in California, which is something he did two years ago to be in optimal shape."

Ohhhhhhh.  So THAT's why Phil Hughes was a piece of crap in 2011.  He was an out of shape fat fatty fat fat magoo because he didn't go to the training facility that he did before the 2010 season.  Maybe this would have been some good information to know back in the spring when everybody was wringing their hands and shaking their heads about where Hughes' velocity and command had gone and he was getting MRI'd and tested up the wazoo to find out what was wrong with him.

Obviously we can't establish complete causality between Hughes being out of shape and his poor 2011 performance, but that would certainly make sense, especially when combined with the major innings increase he took in in 2010.  More work on the shoulder than he's ever experienced + coming into 2011 camp out of shape could very well = crappy Phil Hughes.  It's a bit of surprise that the Yankees didn't mention this stuff earlier in the year.  Did they not want to shame Hughes publicly for being overweight and out of shape?  Did they honestly think that it had nothing to do with his performance?  Did he not even disclose to them that he hadn't attended Athletes' Performance before this past season?

Whatever the reasons are, shame on Hughes for taking his offseason workouts so lightly and coming into 2011 out of shape.  As Marchand mentions in his story, Hughes was expected to step up and take the reins as the #2 starter behind CC this past year and instead he wound up getting kicked to the back of the rotation and then the bullpen again come playoff time.  If Hughes would have taken things more seriously and been in better shape perhaps he could have turned in a better performance in 2011, perhaps he could have convinced the front office and Joe that he is capable of being a #2 starter, and perhaps the Yankees' offseason plans would be different right now.

But enough on the past.  What matters now is that Hughes is reportedly going back to that training facility to get in better shape for 2012.  And a Hughes in better shape makes it more likely that will see a better Hughes on the mound in 2012.  Let's do it to it, Lars.  Fucking PerkiSystem, baby!!

P.S.- I can just picture this Yankee Spring Training fat camp.  All of the out shape guys doing wind sprints and weigh-ins with Mike Harkey there going "Attention, players.  Lunch has been canceled today due to lack of hustle.  Deal with it."
Posted by Unknown at 12:19 PM No comments: 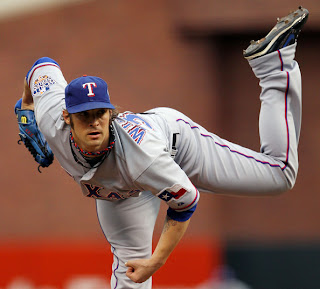 (Would you give $90 mil to this guy?  Courtesy of Getty Images)
CC Sabathia, the biggest potential fish in the free agent pitching pond, has been back in the fold for the Yankees for a couple weeks now.  And since the Yankees avoided any long, drawn out negotiations with him, Cash has been able to get the ball rolling on the process of courting other free agent targets.  The Yankees made no secret that their goal this offseason was to bolster their rotation, and while there aren't any other CCs or Cliff Lees out there, there are a few interesting possibilities.  This week at AB4AR, I'll take a look at some of the Yankees' biggest starting pitching targets, starting with everyone's favorite left-handed converted reliever, C.J. Wilson.

- At 30 years old and with only 2 full seasons of starter work on his resume, Wilson is in the prime of his career and doesn't have nearly the wear and tear on his arm that other pitchers his age have.  This suggests the potential for him to at least continue this level of production over the next few years.

- While he has been healthy the last 2 seasons, Wilson's career is littered with injury issues, including TJS in 2003, elbow and shoulder problems in 2008, and blisters in 2009.  Given that track record, these last 2 seasons of clean health bills could just mean he's due to get hurt again.

- While 2011 was a good year for him in terms of command, Wilson's previous lowest BB rate was 3.38 BB/9 in 2005, and he's had 2 seasons over 4.00 and one over 5.00.  So he's not exactly the most efficient cat on the block, and the Yankees already have plenty of inefficiency in their rotation with Burnett and Hughes.

- He's a Type-A free agent this year, and the Rangers would be stupid not to offer him arbitration, so the Yankees are looking at giving up another 1st-round pick if they sign him.

- His postseason track record is nothing to write home about, in fact it's downright bad.  Small sample size surely plays a part, but Wilson has thrown 52.1 playoff innings over the last 2 seasons and has given up 28 ER and 29 BB in those innings.  This past postseason was particularly brutal, as Wilson put up a 5.79 ERA and 6.31 FIP.  It's something that the media and fans will point to in an argument against him, so it's only fair to mention it here, small sample sizes be damned.

- While he's a "young" 30, Wilson still turns 31 this offseason and he'll likely command at least the 5 years/$82 million that A.J. Burnett and John Lackey got, if not more.  By signing him, and his injury history, the Yankees would be committing themselves long term to another pitcher who will end his contract in his mid-to-late-30s.

His numbers over the last 2 seasons make Wilson look like the ideal #2 starter for the Yankees, an innings machine who strikes guys out, keeps the ball on the ground and in the yard, and has a multitude of pitches with which to work.  But the lack of track record in terms of health, BB rate, and workload is a concern to me, and I see Wilson and his agent commanding more than the 5/$82 mil that A.J. got because his performance over the last 2 seasons is better than what A.J. did.  If the talks start moving towards 6 or 7 years and 90-100 million bucks, I think the Yankees would be wise to take a pass on Wilson.  And honestly, I'd be surprised if they did sign him.  This feels like another case of Cash getting involved to drive the price up for his competition.  I guess we'll see what happens.
Posted by Unknown at 8:54 AM No comments: