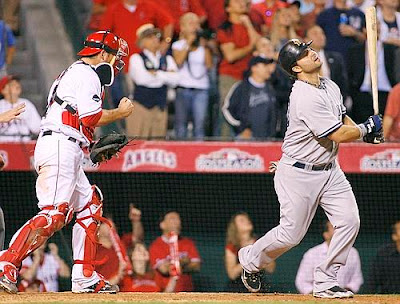 * For all the talk about how the Angels love to steal bases and sac bunt and hit and run, they haven't done any of it this series. And that's mainly because their 2 table setters, Figgins and Abreu, have done nothing. Last night in the first they both get on with a leadoff walk and a double and look what happens. If you can stop those 2, you can cripple the Angels' offense, it's that simple.

* I don't know how he threw the ball in his warmups, but A.J. was flat out garbage in the first inning last night. His fastball had no movement, his curve was flat, and the leadoff walk to Figgins in which he couldn't throw the fastball for a strike made him timid and no doubt contributed to him heaving the ball right over the heart of the plate for the Angels to tee off on.

* The bad umpiring continues. Top 3rd, Damon clearly safe at first and another instance where the ump was in perfect position to make the right call. You almost have to start wondering if there's something fishy going on at this point.

* Through the first 5-6 innings last night, the Yankees showed absolutely no sense of urgency or that they even cared to be playing. It was as if that first inning sucked the life right out of them, which was atypical of how they played from behind all season. Strange to see that creep up in the playoffs.

* I know he plays for the opposing team, but how can fans anywhere ever boo Derek Jeter? The guy plays the game hard all the time, is pretty good with the media, has never been in trouble off the field, never bad mouths anybody, what more do you want? In this day and age of steroids, DUIs, dog-fighting charges, and domestic assaults being almost as common to professional sports as wins and losses, you would think Jeter would be celebrated by all as the consummate professional he is, not booed because he's wearing an "NY" logo. He and Albert Pujols should be officially off-limits to all heckling, booing, and taunting.

* After being successful against him in Game 1, the Yanks' strategy against Lackey was awful last night. They watched way too many hittable fastballs go right by, got themselves behind in the count, and then fell victim to his curveball, which was much more effective in the California heat.

* On the other side, the Angels strategy against Burnett was perfect. If he threw something over the plate on the first pitch just for the sake of throwing a strike, they pounded him. If he didn't, they waited him out, got ahead in the count, and forced him to throw another meatball that they could handle. There were very few swings and misses off of A.J. last night and even fewer balls that weren't hit hard. A typical A.J. off-night that came at the worst time.

* When are the Yankees going to sit Andy Phillips and put Mark Teixeira back at first base? I also remember why I wanted Ramiro Pena on the roster; so the Yankees could have somebody to pinch hit for Cano in clutch situations and not lose any defensive strength.

* Sure the hit in the top of the 7th was huge, but Hideki Matsui has looked awful at the plate this series. He's swinging like David Carradine in a hotel closet: slowly and awkwardly. I said before the game last night that I would have sat Matsui and DH'd Posada. Looking back on it, that would have been the way to go as Posada is more threatening in the 5-hole than Hideki and you could have pinch hit Matsui for Molina in the 5th and used Cervelli as the catcher for the rest of the game.

* His 3-run double was clutch, but Teix is a mess at the plate right now. There's always mention of how he doesn't shift his weight from back to front when he swings, but right now it doesn't even look like he's shifting his hips through the zone and he's leaning too far back in swing. He's seen a lot of hittable pitches this series and he always seems to pop them up, which says to me he isn't getting any drive on his swing and is losing all his power, causing the ball to lift instead of carry into the outfield. Dude needs to get his ass in the cage before tomorrow night because one big 3-4 with 4 RBI game from him could be the difference.

* Mike Scioscia and Joe Girardi must have a side bet on who can mismanage their pitching staff worse in this series. Scioscia pulled the "reverse-Girardi" last night in the top of the 7th, taking out Lackey after he had seemingly recovered from the bad ball 4 call and subsequent Jeter walk, only to watch Darren Oliver and Kevin Jepsen gag on it.

* Not to be outdone, Joe pulled the very rare "double-reverse Girardi" in the bottom of the 7th by leaving A.J. in too long. Sure his pitch count was low, but he had started to show signs of tiring in the 6th and had just sat on the bench for 20 minutes while the Yanks scored 6 runs. When you're running a mentally fragile pitcher out in a clutch spot late in the game, he has to be on a short leash, and when that pitcher is A.J. Burnett the leash needs to be even shorter. Joe let the leash go and A.J. ran across the street to dig up the neighbors' flowers by giving up a leadoff walk and a single.

* Did anybody else find the David Spade DirecTV commercial a little creepy? The dude practically owes his entire career to Chris Farley and the few movies they did together and now he's shooting commercials with images of Farley, making fun of his dead friend to make a quick buck? Bad karma right there...

* The bullpen made the switch from strength back to liability complete last night with their collective awful performance. It doesn't help that Joe manages them like a Little League team with his "everybody gets to pitch" philosophy, but the bottom line is you have to come in and throw strikes and get outs and outside of Mo there's nobody doing that right now.

* Being converted starters, it should have been obvious to Joe by now that Joba and Hughes are not the types of guys to be brought into the game in the middle of an inning with runners on base. Their mindset is more suited to start an inning and get 3 outs because that's what the goal of every starting pitcher is each inning. They're not "stoppers," and their continuing shitting of the bed in these mid-inning situations is proof of that and more evidence that Joe needs to stop this "you pitch to a batter, you pitch to a batter, and you pitch to a batter" mentality.

* And what the fuck is with Joba and Hughes still shaking of every sign Jorge puts down? The guy has caught Major League pitchers for 14 years, fellas, he's knows what he's doing. Hughes shook off Jorge at least twice last night in the Guerrero at-bat to get to the fastball, the pitch he wanted to throw. Based on Guerrero's vomit-inducing swing on the previous curveball, Jorge wanted to go off-speed again, but Hughes shook him off, threw a fastball right down the middle, and the rest is history.

I don’t know where Hughes gets the gall to shake off Jorge for a fastball when he's shown throughout the postseason so far that he can't get his fastball over the plate. Before you start shaking off your veteran catcher, why not try growing a set of balls, get a little hair on them, and make a fucking pitch to get an out?

* One guy in the Yankee pen who has shown he can be a "stopper" guy is Dave Robertson and yet Joe continues to let him sit on the bench in big situations. What did Robertson do to piss off Joe? Did he bang his wife? Because something must be up for him to not be getting used, especially after he showed he has the stones that Joba and Hughes lack when he got out of the bases-loaded, nobody out situation in Minnesota.

The path should be clear now: use Joba and Hughes to start innings in relief, and use Robertson and Coke as your mid-inning, runners on-base, matchup "stopper" guys if the situation starts getting hairy.

* It's 20/20 hindsight, but Joe should have gone to Mo right after Marte got the 2nd out of the 7th inning. It's unconventional, but that moment right there was the situation where the game could be won or lost and logic dictates that you should have your best pitcher out there in that situation. Mo, more than anybody, is well-suited to come in and get one out; you bring him in, he gets out of the jam in the 7th with the lead intact, then works through the 8th. If his pitch count is low, maybe you let him start the 9th, if not, then you go to Hughes, Coke, Robertson, whoever, to get the job done in the 9th.

He wouldn't be credited with a save, but he would have been the one to "save" the game by getting a key out that preserves the lead. It's the same argument Max Kellerman always used in discussing closers; they have that title because they are the best relief pitcher in the bullpen, and when you have a situation where the game and the lead is on the line, you should want to bring in your best pitcher, regardless of what inning it is.

Too many managers focus on what inning they bring their guys in instead of thinking in the moment. The Yankees lost the game in the bottom of the 7th, but could have won it if they held that one-run lead they still had with 2 outs. Bring in your best guy to put out the fire in that pressure situation and then worry about the 9th when you get to it. Once the lead is blown, using Mo after the fact is a waste of time and a waste of Mo.

* I hate to even bring it up, but Game 6 is no sure thing, even being back at the Stadium. The stats show that Andy has not pitched well at home this season, and of all the starting pitchers has been the one least able to adapt to the way the new Stadium plays. Hopefully he can get a quick B12 shot tomorrow to give him that little extra because after last night's meltdown Joe is going to need 7 from him to feel comfortable about getting to Mo to close it out.
Posted by Unknown at 8:42 AM No comments: