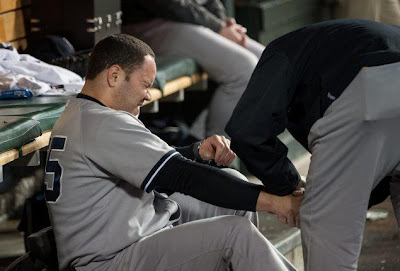 Lost in all the talk about the sputtering offense, ever-changing lineups, and who Alex Rodriguez is or isn’t talking to in the stands has been the quietly valuable performance of a one Russell Martin. You remember him, right? The guy who spent the majority of the regular season batting below the Mendoza Line and then turned things around enough in September to probably earn himself a new deal with the Yankees next year? It wouldn’t be all that surprising if you had forgotten about him; his .172/.250/.310 tripleslash in the postseason isn’t exactly a resume builder and is more representative of his early-season struggles than his strong finish. But after playing through what is always a grueling regular season for a catcher, Martin has been out there behind the plate for every playoff game, has done a very good job back there, and that is something that should not be discounted.

The Yankees have played 8 games in 10 days since October 7th, and Martin has caught every inning of those 8 games. 3 of those games have gone to extra innings, all of them happening 4 days apart, and Martin’s been there for all of it. In that 4-day span from Game 3 of the ALDS to Game 1 of the ALCS, Martin caught 46 innings and went 4-16 with a double, 2 R, 1 BB, and 2 K. Nothing too shiny offensively, but the job he has done behind the plate blocking dozens of curveballs, sliders, and splitters down in the dirt, and controlling the opposing teams’ running games has been a critical factor in keeping the Yankees close while their offense chokes and at least giving them a chance to win. The pitching performance from top to bottom has been stellar for the Yankee staff this postseason, and at least a small piece of credit for that should go to Martin for the pitches he’s called, pitches he’s framed, and the stellar work he’s done keeping balls in front of him.

By my count, there were just 3 other times this season when Martin caught more consecutive games than he’s caught in the last week and a half. He caught the first 10 games to start the season in April, and had 2 different stretches of 13 consecutive games played in early June and mid-August. Those all included an off day here or there, as this postseason has, but that still does little to allow all the wear and tear a catcher takes to fully heal. And when you consider that based on innings count Martin has already caught 9 straight games in the playoffs, with the 10th coming later tonight, that’s an effort to which you have to tip your cap. If you think the jammed thumb he suffered late in Game 3 is the only thing hurting on Martin right now, you are outside of your mind.

Russell Martin hasn’t hit much better than many of the other struggling Yankee regulars this October, but the job he’s done behind the plate and the fact that he’s been out there for every inning of every game has been a contributing factor to the small amount of playoff success the Yankees have had, and it’s worthy of some recognition and praise.
Posted by Unknown at 11:00 AM