Got the company tickets for tonight's Brewers-Mets game.  Requested 'em planning to catch a Matt Harvey start.  Missed him by 2 days.  Instead I got Zack Wheeler.  So pissed.  Now onto the links!

- On Monday, el duque of It Is High... suggested another lefty DH option.  That short bench could probably use him too.

- A pair of good ones from the IIATMS/TYA team.  On Monday, Domenic Lanza visually represented the Yankees' offensive downturn which, if you're interested in that kind of thing, makes the numbers look even worse than they already did.  Holy balls, this team cannot hit!

- Martin Riggs of NoMaas pointed out a drastic change in trends for Robinson Cano's 2013 Home/Road batting splits.  Different approach with the short porch?

- Dave Dechenaux of Yanks Go Yard compared the careers of Andy Pettitte and Whitey Ford as Pettite passed The Chairman for the franchise K record this week.

- Daniel Burch of The Greedy Pinstripes had an interview with 2013 11th round pick Kendall Coleman.  Kid's toolsy, that's for sure.

- On Wednesday, Mike Axisa of RAB prioritized the Yankees' trade deadline needs.  If you were thinking "pitching depth," you would be wrong.

- Derek Albin of Pinstriped Bible examined the negative impact CC's diminished fastball might be having on his other pitches.

- SG of RLYW commented on how valuable Brett Gardner has been this season and on the different path he's taking to generate that value.

- On Thursday, Chad Jennings of LoHud had the latest on the A-Rod Rehab Tour and got A-Rod's thoughts on his first 2 games.

- On Friday, Craig Calcaterra of Hardball Talk took down Wally Matthews for his latest idiotic anti-A-Rod post.  Double kudos to Craig for doing it a lot more succinctly than I usually do it.  That's why he gets the big bucks.

For today's jam, we're going with a little more America music.  Since none of the major networks were smart enough to play this classic last night - and why would they with such great American artists like Swedish House Mafia and Rihanna who needed to be played? - we'll ride out on it today.

Cervelli Suffers Setback In His Rehab

Francisco Cervelli really can't catch a break, can he?  The broken hand from April continues to haunt him after the Yankees announced yesterday that he had suffered a stress reaction in his right elbow that will cause him to be shut down for at least 2 weeks.  The team believes he re-aggravated an old elbow problem trying to change his throwing motion to compensate for the hand.  He had been doing throwing and hitting drills in Tampa for a few weeks and was part of the mob expected back sometime after the All Star break but that's off the table.

The question now becomes what will the Yankees do in response?  They have been letting catching upgrade options go by on the waiver wire for the last few weeks despite an obvious need for an offensive upgrade over the Stewart-Romine tandem.  If Cervelli is now out until mid-August or later, will they take a more active approach in looking for that upgrade or will they go with with they've got?
Posted by Unknown at 1:00 PM No comments: 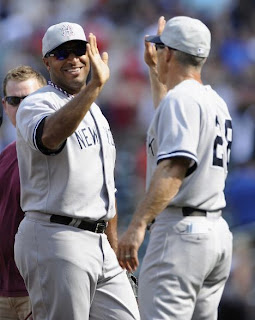 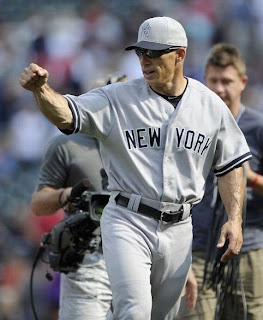