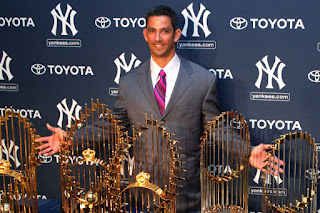 Everybody probably already knows this by now, but if not, BREAKING NEWZ!!!!

Tomorrow is the home opener and the recently-retired Jorge Posada is scheduled to throw out the ceremonial first pitch.  As someone (probably one of the few) who was always on the fence when it came to Jorge and not head-over-heels in fanlove with him like most Yankee fans, I will say that I am pleasantly surprised that this is happening.

Truth be told, I thought there would be a little more time between his retirement and return to Yankee Stadium because of how things ended between Jorge and the Yankees.  There was the whole "taking himself out of the lineup" fiasco last the season, the outright declaration by the Yankees that they weren't going to offer him a new deal, and Jorge basically being forced to retire because no other teams were interested in him.  I got the sense from watching the clips of his retirement press conference and reading some of the quotes that he really didn't WANT to have to hang them up, and I'm glad that there doesn't appear to be any ill will between him and the one organization he called home for so long.

Tomorrow afternoon's game will definitely be in the top 5 for games I wish I could have attended since I moved out to Wisconsin and it's simply because Jorge is going to be there to throw out the first pitch.  The atmosphere is going to be INSANE!  I'm literally getting goosebumps right now at my desk thinking about how loud that ovation is going to be.  After the rough way Jorge went out as a player, it's only right to bring him right back to the place where he is universally loved so he can be reminded of just how important and beloved a member of the Yankee family he is.

** If any AB4AR readers are going to the game tomorrow, take some pictures or video of the days' events and send them to me.  I'd love to get a sense of what the atmosphere was like and I'd love to throw some stuff up in a post. **
Posted by Unknown at 12:49 PM No comments:

The Benefit Of 20/20 Foresight (And Failing To Use It)

I'm always the first to pipe up about Joe's on-field decisions when it comes to managing his bullpen, be they good calls or bad calls (usually bad).  But for the Yankees to extend that questionable bullpen decision-making to the pre-game, well that's something I'm not familiar with and something I was very surprised to see play out yesterday.  If you were not aware, the Yankees entered last night's game quite understaffed in their relief corps after the previous 2 games.  Let's review:
* (Mo shouldn't have been available, but when your team gets the lead in extra innings on the road, you can't leave that lead in the hands of Clay Rapada)

That left the Yankees with just 2 guaranteed available arms out of the 'pen last night in Boone Logan and Clay Rapada, both guys who are best utilized as short-relief lefty specialists.  Rafael Soriano was a game-time decision after ripping the nail off the middle finger of his pitching hand while warming up on Tuesday night, and I don't remember reading anywhere prior to the game that his availability had been confirmed.  The Yankees knew all of this after last night's game ended.  None of this was a surprise or something that caught them off guard, and they had plenty of time to make a roster move to add some depth, and yet they chose not to. 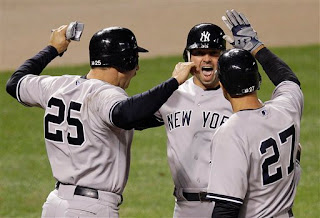 (Swishalicious!  Courtesy of The AP)﻿

I'm going to save my rant on the Yankees' decision to not add bullpen reinforcements for another post in a few hours.  The important thing is they got the job done last night with the players they had and completed the series sweep in Baltimore.

- After a so-so Opening Day outing where his fastball command was spotty and he had to battle through 6 innings, it was more of the same for CC last night.  He struggled with his fastball again, missing up with it a lot and practically eliminating it from his arsenal after 3-4 innings.  His slider was money as an out pitch and he used that to battle his way through a 6 IP, 8 H, 4 ER, 2 BB, 8 K line.

- Orioles' starter Jake Arrieta did his best Wei-Yin Chen impression, giving up a leadoff double to Derek Jeter and a follow-up HR to Curtis Granderson in the top of the 1st, but then settled down after that to mostly keep the Yankee offense at bay.  He made it through 6.2 innings before succumbing to the vintage Yankee patience and giving up the game-tying 4th run in the 7th.

- After the last 2 games, the Yankees entered the game with only Boone Logan and Clay Rapada definitely available out of the 'pen, and Rafael Soriano a game-time decision after his fingernail tearing incident on Tuesday night.  Logan and Soriano both came up big picking up CC in the later innings, combing for 0 R allowed on 1 hit in 3 innings.

- Despite using him in each of the previous 2 games, Joe channeled his inner Herm Edwards and played to win the game by going to Mo after Swish cracked a 2-run HR in the top of the 10th to give the Yankees the lead.  Mo did what he does, and the Yankees left Baltimore with a sweep and a record back at .500.

- Swish: Game-winning 2-run homers in extra innings will tend to get you in this section of the AB4AR recap.

Thankfully, the Yankees get an off day to rest up the majority of their bullpen that wasn't available tonight before heading back to The Stadium for their season-opening home series against the Angels.