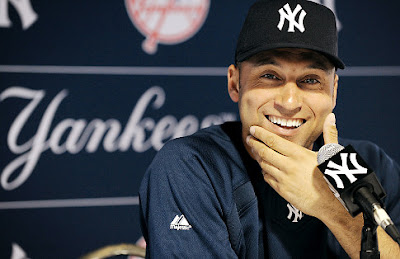 "Why yes.  Jessicas Biel and Alba will be joining me for a postgame rendezvous." Courtesy of The Daily News)﻿

It would be a Yankee sacrilege to not point out and acknowledge that today is Derek Jeter's birthday.  The Captain turns 38 today, and despite a recent stretch of underwhelming offensive output, is still outperforming what a shortstop his age should rightfully be doing.  The guy is and has been the unofficial King of New York for the last 15 years or so, is a 5-time champion, a member of the 3,000-hit club, a no-doubt first-ballot HOFer, and yet it still doesn't seem like it was that long ago that I was dragging my old man to card shows at the mall so I could push people out of the way and buy up as many Derek Jeter cards as my minuscule 13-year-old bankroll would allow.

So Happy Birthday, Derek!  Keep doing the damn thing.  If recent history has taught us anything, it's that Jeter will probably go 3-4 tonight with a walk, 2 doubles, and the game-winning RBI.

P.S.- What do you get Derek Jeter for his birthday?  Does his family even bother getting him gifts or even a card?  What do you get the guy who has everything??  He's Derek Effing Jeter for crying out loud!
Posted by Unknown at 12:25 PM No comments:

Just to be clear, before anyone bookmarks this post to point back to in October if the Yankees don't win the division, this is not me coming out and saying that the Yankees are absolutely going to win the AL East this year.

Crap.  Maybe it is.  Well whatever.  I'm feeling pretty good about where the Yankees stand right now and I'm not going to apologize for it.  The doom and gloom of May has been replaced by a very successful June, and that's despite the fact that there are still some glaring problem areas in the team's overall performance.  The Yankees have risen while the rest of their AL East competition has either floundered or treaded water, and with 90 games to play to iron out their remaining issues there's reason to be confident.  That confidence comes with plenty of "ifs," "ands," and "buts" attached to it, and this season has already taught us that even the most unthinkable can happen, but here are 5 things that can counter a lot of the IA&Bs as we move closer to the 2nd half of the season. 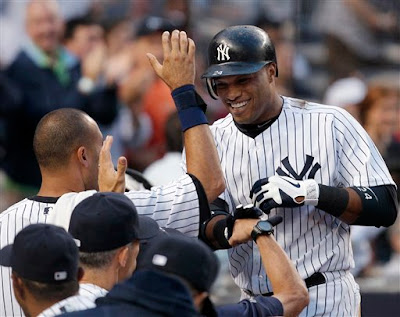