First Walk-Off Of The Year

From down 5-0 in a game where Phil Hughes' arm was lifeless again to the first walk-off win of the year in extra innings?  Yeah, I'll take that.

Somebody get the whipped cream ready and somebody hit the fucking music!!!

Posted by Unknown at 9:26 PM No comments:

It looks like Pedro's desire for revenge against Dan Warthen will have to come next year, because his MRI came back and it doesn't look good.  This statement from Joe yesterday paints a pretty grim picture:

If that statement doesn't scream "SEASON ENDING SHOULDER SURGERY!!!!!!" then I don't know what does.  I can't really hold it against Feliciano, since it wasn't his call to be run into the ground over the last 3 years by the Mets, but his final stats for the season don't exactly live up to the 2-year, $8 million deal the Yankees signed him to.

So long, Pedro.  It's a shame we didn't get to see you perform in the pinstripes.  Maybe you and your shredded shoulder will be back next year.  Then again, maybe not.

A.J. Wins Another One 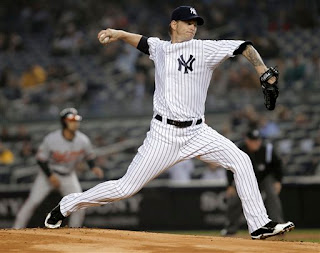 (Look!  He's landing on his heel!  Courtesy of The AP)
The final line might not show it, thanks to 2 2-run homers in the 7th, but A.J. was definitely Good A.J. last night.  And more importantly, he managed to be Good A.J. despite having a rough start that usually signals the appearance of Bad A.J.  He was giving up hits and walks, throwing wild pitches, and according to his postgame interview, he was so concerned about his poor mechanics that he actually called Larry Rothschild out to the mound.


“It was actually probably the first time in my career I actually called a pitching coach out. I was landing on my heel constantly, couldn’t correct it. I called him out and just basically said, ‘I’m landing on my heel. What’s going on?’"

"Forget about that. Next pitch, just let it go. You’re fine."

And he was.  From then on, A.J. retired 14 of the next 16 he faced and held up the big lead that the offense gave him early.  And that comment from Rothschild was all it took.  No tweaking of mechanics, no correction of how he should plant his lead foot to get off his heal, just a vote of confidence.  And you know what?  Maybe that's all A.J. needs.  We all know that when he's on, he's damn near unhittable.  Maybe he doesn't need to be poked and prodded every time he starts screwing up.  Maybe he just needs a pitching coach who's going to tell him he's fine, give him the confidence to settle down and pitch and then deal with the mechanical stuff on an off-day.

Just like with the lineup, it's still too early to make any definitive conclusions, especially considering how well he started last year, but A.J. looks good out of the gate again.  His mid-4s ERA does not speak to how well he has pitched in his first 3 outings, and his changeup is starting to become a dangerous weapon for him.  He threw it a lot last night and it's looking good.  Being able to add that in and make it a usable pitch should help A.J. immensely moving forward on days where he doesn't have his best stuff and on days when The Horse isn't mashing balls all over the yard.