Well I guess all that talk about what Nova and Phelps have to do to nail down the 5th starter spot was naught, huh?  David Phelps will be starting the first game of tomorrow's doubleheader against the Indians for sure, and after feeling something in his left side playing catch this morning, Ivan Nova will definitely not be starting the second game.  Not only will Nova not be starting, he more than likely won't be coming off the DL at all tomorrow when he's scheduled to, which puts the Yankees in a difficult position to cover the second game tomorrow now that Joe has ruled out CC Sabathia.

The most likely option is a tandem long relief start by Adam Warren and Vidal Nuno, each of whom are capable of going at least 2-3+ innings.  Not knowing if he'll have to use one or both of them today, Joe can't fully commit to that option right now and it sounds like he'll be using the new "26th man" rule for doubleheaders to give himself some insurance.

It's not your typical news source, but according to Ty Hensley's mother's Twitter account, the Yankees will call up Brett Marshall tomorrow to serve as their 26th roster man.  Marshall has been pitching in Triple-A all season (4.60 ERA/4.19 FIP in 31.1 IP), and is scheduled to make his next start tomorrow.  If Nuno or Warren becomes unavailable, Marshall will at least be able to go out and eat innings based on pitch count.  Either way, the Yanks should have at least have a plan for tomorrow night's second game.

** UPDATE 6:19 PM- Per Joe during today's postgame presser, Nuno will get the start in the second game.  Warren will be his caddy and Marshall will be on standby at the team hotel if it turns out they need another arm for the second game. **
Posted by Unknown at 12:46 PM No comments:

Nunez To The DL, Gonzalez Called Up

After being unable to go again last night, the Yankees have elected to put Eduardo Nunez on the 15-day DL to hopefully allow him to completely recover from his nagging ribcage issue.  Nunez has been out of the lineup since leaving last Sunday's game with a muscle strain in his ribcage, so the DL stint will be backdated to May 6th.  The recently acquired Alberto Gonzalez will be called up from Triple-A to take Nunez's roster spot, and Mark Teixeira has been moved to the 60-day DL to open a 40-man spot for Gonzalez.

This move doesn't come as a huge surprise given the length of time it's already taken Nunez to recover from what was thought to be a minor tweak and the moves the Yankees have made/are making to address their dwindling infield depth.  They made the trade for Gonzalez a few days ago, and then there was yesterday's report about David Adams getting called up next week.  It all adds up to a pretty obvious DL stint situation, and here's hoping the extra week off will help Nunez get over this injury.
Posted by Unknown at 10:05 AM No comments: 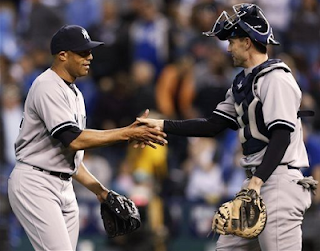 (Ho-hum, another save.  Courtesy of the AP)

One bad start in a row is nothing.  Two in a row is enough to get people to start paying attention.  Three would have been cause for concern.  Luckily Andy Pettitte didn't make it to three last night, rebounding from his recent poor stretch of command-less outings last night with a very good performance and outdueling "Big Game" James Shields for another 1-run Yankee victory.  That's 4 in a row, guaranteeing them nothing worse than a .500 record on this road trip with 3 games to play.  I'll take that any day.

- Runs were hard to come by early for both teams.  The Yanks got theirs in the 3rd on a Chris Nelson leadoff double and a throwing error by Mike Moustakas.  KC got theirs a half-inning later on a leadoff single, stolen base, and a pair of groundouts.

- Pettitte's command was much better than in his last 2 bad starts, especially his cutter.  He was locating down in the zone, getting a lot of GB outs, and getting swings and misses on his slider.

- The one mistake he made came in the bottom of the 4th, when he grooved a 2-1 fastball to Billy Butler.  Butler hit it for a solo HR and the Royals had a 2-1 lead.

- That lead didn't last very long.  Shields hit Chris Stewart to start the top of the 5th, and after getting 2 outs he fell behind Vernon Wells 3-1.  Like Pettitte, he had to throw a fastball in that count and like Pettitte he threw a bad one that Wells hit for a 2-run homer and a 3-2 Yankee lead.

- Andy retired the final 7 batters he faced, all on the infield, and D-Rob and Mo nailed down the final 2 innings.  D-Rob was positively filthy in the 8th, striking out the side on 12 pitches.