Does The Trade Deadline Really Matter? 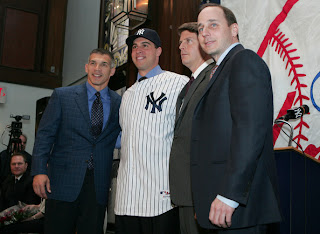 Seriously, why do we waste time counting down to the trade deadline and devoting entire Baseball Tonight Specials to the deadline when all the meaningful deals are being done a month after the fact?

In this economy, teams are looking to cut costs, which not only contributes to your Scott Kazmirs and Jim Thomes of the world getting traded for rosin bags and extra pine tar, but also to other teams not putting in claims to block the trades.

With all these moves being made by major contenders, the Yankees have to do something, right? Why aren't they out there trying to bring in another bat or another arm for the stretch run?

For all the bad calls he's made in the past, Brian Cashman has been like King Midas this year. People can complain all they want about how much the Yankees spend and wah-wah-wah, but the fact of the matter is they spent the money wisely this season and it's panned out just about as well as it possibly could have. When the 37-year-old you signed for $5.5 mil to be your 4th starter has 12 wins and looks like the second coming of Cy Young, it's safe to say you've done a bang-up job.

The Yankees are head and shoulders above the competition this season and the competition knows it. Now they're all in panic mode trying to stock up for the postseason, taking on big-money contracts and risking upsetting team chemistry like the 2005-2006 Yankees. Meanwhile, the Bombers get to sit back and enjoy the already establish fruits of their labor while they continue to knock everyone's dick in the dirt.
Posted by Unknown at 3:08 PM No comments: