Money Well Spent...And Then Some 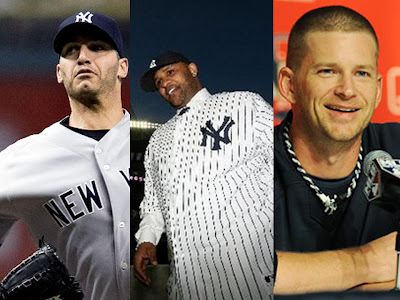 For all the praise and semen that the media threw at Theo Epstein and the Red Sox for their "smart," cheap offseason signings and the bitching and moaning about all the money the Yankees threw at their big free agents, the numbers of this season prove why the Yankees were the ones that made the smart investments. Observe.

John Smoltz' and Brad Penny's combined stats during their time in Boston were:

For the $10.5 million in salary they were signed to, that works out to approximately $1.167 million per win. Factor in that both players were eventually released mid-season because they were so ineffective and it goes without saying that the Red Sox would have been better served to take that $10.5 million and donate it to charity, spend it on supplements for Sloppi and Varitek, or just burn it right in center field.

For the $37.286 million in salary that they were paid (5.5 mil Pettitte, 16.5 mil A.J., 15.286 mil CC), those numbers work out to $810,565 per win. Factor in the more than respectable ERA and WHIP numbers and the fact that these 3 ate up over 600 innings, that makes their combined worth much more proportional to what they were paid, and may even make their worth a steal when you consider what they were paid.

As if those numbers weren't glaring enough, Smoltz, Penny, and the incredible Dice-Gay (who made $8.333 million this year to pitch to an ERA of almost 6.00 in the regular season) combined to put up goose eggs across the board in any stat in the playoffs for Boston. By comparison, CC, A.J., and Andy's numbers look like so:

Those numbers are damn good, and even more impressive when you consider the ERA and WHIP values are disproportionally high due to A.J.'s 5.27 postseason ERA and 38 baserunners in 27.1 innings. These 5 guys all started 5 games in the playoffs and in those 15 starts, they got quality starts in 13 of them, lights-out performances in at least half of them (see: CC in the ALDS, Burnett in Game 2 of the WS, etc.), and series-clinching wins from the cheapest member of this trio (Pettitte) in all 3 playoff series.

Sure player salaries are incredibly out of this world for what these guys do for a living, but for the most part there is a reason why better players command bigger salaries and why those guys are paid that much; they fucking produce!!

The Red Sox thought they would try to be cute and play financial smallball to get themselves another title and it backfired on them in the form of a washed-up old man coming off of arm surgery and a has-been fat guy whose biggest baseball highlight is still the fact that he fucked Alyssa Milano.

The Yankees shelled out big bucks for guys in their primes and got a still-productive veteran at a bargain price and rode all 3 to a title. The differences in approach and result are night and day, and are even more glaring when you consider Andy's season totals alone outdo the combined numbers of Penny and Smoltz for the same price.

I also would mention that Boston's only major position player signing, Rocco Baldelli, put up numbers similar to Brett Gardner while Teix and Swish combined for 68 HRs, 204 RBIs, and 1 Gold Glove, but that would just be rubbing it in.
Posted by Unknown at 1:21 PM No comments: