Joe's Not Going To Make This Season Easy On Me, Is He?

For the most part, Joe Girardi is the ideal type of guy to manage the New York Yankees.  He's level-headed, he's a former catcher, the position that usually lends itself well to becoming a good manager, he's played in New York before so he understands how the handle the pressure and media scrutiny, and he understands how to handle his players' personalities.  One area that he never seems to have a firm grasp on, though, is the management of his pitching staff.  It's nothing else if not inconsistent and I would describe it as meddlesome; a strategy almost always formulated based on matchup history and pages in a binder rather than the entirety of the situation playing out in real time on the field.  Yesterday was another classic example of Joe bowing to the numbers in the pages and not the game situation at hand, and it cost the Yankees 4 runs.

On paper, his decision yesterday to intentionally walk Sean Rodriguez to load the bases was solid.  There were 2 outs, runners in scoring position, Rodriguez had experienced some success hitting against CC in his career, and the hitter coming up behind Rodriguez had a career 4-35 batting line against CC.  That hitter, Carlos Pena, was also left-handed, playing into the almost always desirable lefty-on-lefty matchup.  But baseball games are not played on paper, and what was happening on the field over the course of that half inning was not captured in Joe's binder notes, could not be captured in his binder notes, and should have been just as big a determining factor in Joe's decision making as Pena's career stats against CC were, if not bigger. 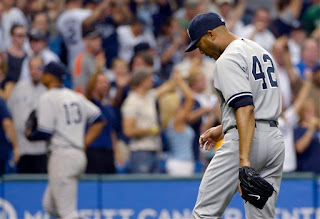 (I don't know if this Rivera kid is going to make it.  Courtesy of The AP)﻿

I'm going to try to take another step towards blog legitimacy and do game recaps for each game this year.  There might be a few that I miss here and there, but my plan is to get as many of them as I can and to do them the morning after the game's played.  For a first crack at it, yesterday's game certainly provided a lot of talking points, many of them centered around the Yankee pitching.  If there was one word to describe the events that unfolded during yesterday's game, it would be "bizarre."

- CC struggled early, loading the bases in the bottom of the 1st inning after Joe decided to intentionally walk the immortal Sean Rodriguez and his .302 career wOBA to get to Carlos Pena.  It was definitely a case of overmanaging, as Joe wanted the lefty-lefty matchup with 2 outs.  Pena ended up hitting a grand slam on a 3-2 pitch to put the Rays ahead 4-0.

- After fighting back and touching up Tampa starter James Shields for 6 runs on 9 hits and 3 walks in 5 innings to take a 6-5 lead, the Yankee offense did their best impression of last year's ALDS and went dormant, failing to get a single hit in the final 4 innings.

- With runners on the corners and 1 out in the bottom of the 8th, the Yankees were bailed out by a possible missed sign when Jose Molina tried to squeeze bunt with 2 strikes.  He bunted foul, was out, and D-Rob finished off the inning by striking out Matt Joyce to preserve the lead.

- The most bizarre sight of all was Mo in the 9th, as it usually is when he doesn't convert the save.  He blew the save on just 5 pitches, allowing a leadoff single to Desmond Jennings and a game-tying riple to Ben Zobrist.  Then, after more intentional walks to load the bases and Eduardo Nunez entering the game as a 5th infielder, Mo gave up the game-winning hit to, you guessed it, Carlos Pena.

- Pena was 4-35 against CC in his career and 0-11 against Mo, and he picked up run-scoring hits off of both of them right after the previous hitter was intentionally walked to get to him.  #YaJustCan'tPredictBaseballSuzyn

The Yanks will go for their first win of the season tonight in the 2nd game of this series.  Hiroki Kuroda will be on the hill for New York against David Price of Tampa.