Is Phil Hughes Falling Into A Dangerous Pattern?

Saturday night was Phil Hughes' second consecutive start in which he threw a lot of pitches (117) for a lot of strikes (88) without getting a lot of outs (5 2/3 IP).  The Mets, like the Red Sox earlier in the week, fouled off an incredible number of pitches (42) to drive up Phil's pitch count, work to give themselves something good to hit, and eventually knock him out of the game.  Yesterday, Matt from The Yankee U had some interesting comments on Phil's approach against the Mets:

"The most trouble Hughes saw was against the Mets’ 3-4-5 hitters. These hitters, Jason Bay, Ike Davis, and David Wright, saw just 7 non fastballs (6 curves, 1 change) in their nine combined at bats. The most concerning part of this was the third at bat against Wright, seen here. While the result, a strikeout, was very good, the fact that Hughes and Cervelli had the same approach against Wright as they did in the previous two at bats (RBI singles), is unsettling. Either they weren’t recognizing that Wright was catching up to the fastball/cutter or Hughes was just being too stubborn and shaking off any of Cervelli’s calls for non-fastballs/cutters.

... As the season progresses, I hope Phil realizes that he can’t just keep going to the fastball and cutter to put guys away easily. His curveball has very good bite to it and I hate to see it go unused. As for the changeup, well, I’m actually kind of angry about that. All spring training, we were told that Phil Hughes had improved his change up and that was the reason he won the fifth starter’s job over Joba Chamberlain. This was a lie. Hughes has thrown 13 changeups all season, including last night when he threw just one." (courtesy of TYU)

In praising Hughes recently, I commented on how his approach on the mound this season seemed to be one of the biggest keys to his success.  He was learning to recognize what was working and what wasn't on the mound and use those pitches to his advantage to attack and get hitters out.  Over the course of his early starts, Phil was pounding away with the fastball and the cutter, getting ahead in the count, and then pitching to contact to get outs or throwing the curve sparingly as his strikeout pitch.

Judging by the results of his last 2 outings, however, it seems like teams have started to catch on to Hughes' approach and are taking a more aggressive stance against him, fouling off his offerings knowing he is going to stay away from his off-speed stuff and come right back with the heat or the cutter.  And this is the other, much more dangerous side, to the coin that is Phil Hughes' approach.  It's one thing to pitch to your strengths and try to dictate the way you want a game to go.  It's another to pitch to your strengths so much that your approach becomes monotonous and teams pick up on it to the point that they change their approach accordingly and then THEY start to dictate where the game goes.

This is all part of the maturation process that Hughes is still going through and will continue to adapt as the season moves forward.  Hughes has had great success early on with his 2 strongest pitches, but to be a complete pitcher and top-line starter he needs to throw more curveballs and work his changeup into his repertoire more often.  I agree with Matt that Hughes' curveball is already solid and needs to be thrown more and also that all the raving that was done about his changeup in Spring Training means nothing if he is never going to incorporate it into game situations.

Phil has already made great strides this season towards becoming a top-line starter, but he is by no means a complete pitcher yet.  He needs to work with his catchers and Dave Eiland to work more off-speed stuff into his approach and keep hitters honest so he can still get max value out of his fastball and cutter.  I'm sure this is something that Hughes, Eiland, and Joe are already aware of and it will be interesting to see how much Phil changes his approach during his next couple outings. 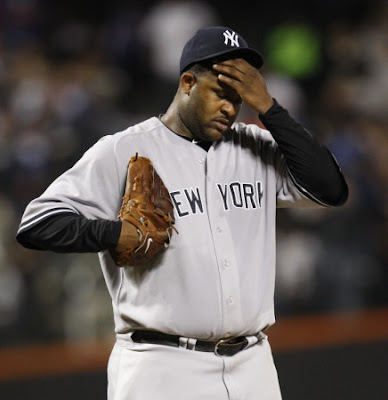 This off day comes at the perfect time.  Everybody needs a day to rest, re-focus, re-energize, and get their collective shit together.  I know it ain't Jeet's style, but with Jorge out of the lineup and on the shelf, he needs to step up and fill that vocal leader void in the clubhouse.  A little 10-15-minute "players only" meeting to get everybody back together and get some good vibes going seems like a good idea right now.
Posted by Unknown at 7:14 AM No comments: