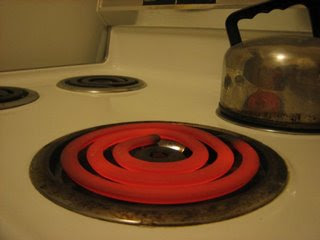 Jose Molina- Like him, but he's overpriced as a backup who is almost always a guaranteed out at the bottom of the lineup. For the money the Yanks are spending on A.J., he needs to suck it up and learn to work with Jorge, and for the stupidly high amount of money that the Mets might throw at Molina, the Yanks should let him walk and make room for Francisco Cervelli a/o Jesus Montero.

Chien-Ming Wang- Has been beyond useless for the last 2 seasons and has major questions about his mental makeup after hitting these bumps in the road, but let's not forget this is the same guy who won 38 games from 06-07. He isn't worth $1 million right now, let alone 4-5, and won't be ready to pitch until mid to late summer so nobody will want him. If he's smart, he'll agree to come back to the Yanks for a barebones minor league deal and finish re-habbing. If he's dumb, let him leave and focus on Hughes, Kennedy, and Ivan Nova.

Andy Pettitte- Dude more than earned his $5.5 mil last season and as a reward should get a 1-year deal for $10-12 mil, 2 for 20 if he wants to pitch that much longer. His stuff obviously isn't going to get any better, but his ability to pitch and think on the mound has, and his pick-off move is still second to none. You see any better options for a #3 starter next year?

Hideki Matsui- It's tough to argue with the guy's production and clutch hitting, but the fact that he's a defensive liability and cripples the team's lineup flexibility in interleague situations does make him less valuable. If he can swallow his pride and admit that he would rather continue to DH and contend for titles than try to prove he can still play the outfield, then he's definitely worth bringing back for one year at $10 mil. But no more than that, because the majority of the DH at-bats need to be reserved for Jorge in 2011.

Johnny Damon- Can still play the outfield, which gives him more value than Matsui, but is getting older and stumbled to the finish last season before heating up a bit in the playoffs. Damon has said he wants to be back, but he will have to prove that wanting to win is more important to him than wanting to get a big, Jeter-esque contract that Scott Boras is looking for. A 1-year deal at $8-10 million is more than fair and I could live with a team option for 2011, but getting locked into long-term deals with aging players is what got the Yankees into trouble in the past so if that's what Damon is looking for, I would have no problem saying adios, friend-o, and bringing in Austin Jackson for an audition to win the spot next year.

Curtis Granderson- If they can get him without giving up A-Jax then I'm all for it. He makes them younger and more athletic in the outfield, gives them one more lefty power bat to punish the short right field of the new Stadium, and also more speed on the basepaths to make the Yankees even more dangerous playing the smallball game. He's a defensive upgrade over anybody at any outfield position that the Yankees currently have and would give them leverage over Johnny Damon and Matsui to convince them to sign 1-year deals if they want to stay.
Posted by Unknown at 4:35 PM No comments: 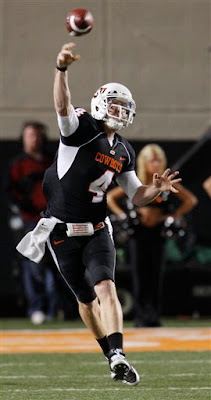 Jesus Christ, is there anything the Yankees can't do? Even their minor league scrap metal turns to gold in other places. Brandon Weeden may have sucked a fat one as a pitcher and been a huge waste of a 2nd-round draft pick, but goddamn! That motherfucker can play some quarterback!

So if Oklahoma St. ends up winning the Big 12, that's kinda like the Yankees winning another division title too, isn't it? It's stories like this that make me proud to be a Yankee fan.

Posted by Unknown at 3:24 PM No comments: