To quote Aaron Lewis, it's been awhile since we've done one of these.  So let's get out there and take a gander around the Yankosphere.

- Rob at BBD weighs in on the latest in the Joba Saga and decides the Yankees are making the best of the crummy situation they created with him.  As someone who always supported the "Joba as a reliever" idea, I think it's good to see him coming out of the gates strong this year and better to see him being used a lot.  Might as well maximize what little value he has left, right?

- Chad at LoHud has the latest details on the Yankee Minor League rosters, and they are shaping up nicely.  Those Double- and Triple-A rotations are scary good.

- And because I love this stuff, here's Chad's post from last Friday on the layout of the Yankee locker room.

- Mike Axisa at RAB breaks down Super Nova's performance last night and shows that he's starting to get better at changing things up as he goes through a lineup multiple times.  He isn't all the way there yet, but he's getting there.

- Brien from IIATMS has a piece about the epidemic of former player analysts and how the epidemic needs to be stopped.  Consider me at the front of this picket line against broadcast tyranny.

- Lenny Neslin has a new sidekick at LenNY's Yankees and the first round of "Nate's Takes" was chock full of solid points about the early-season games.  I think you and I are going to get along just fine, Nate.

- Matt Imbrogno of TYA (and fellow UConn Husky) has a good post about learning to live with Soriano and his contract this season.  He's like your crazy family dog.  You hate that he ate your prized Vlad Guerrero rookie card (the contract), but you still love when he comes bounding up to you all googly-eyed with a tennis ball in his mouth (the shutdown 8th-inning performances).

Was that Bill Simmons-ish enough for everybody?

- el duque of It Is High... becomes the first to congratulate Kei Igawa on his promotion to Double-A Trenton.  If only he had more time to make it down to Single-A and complete baseball's first ever complete reverse promotion through an organization.

- Steve Goldman of Pinstriped Bible has a dose of reality for anybody overreacting (good or bad) to the first 4 games of the year.  I'd like to think that most readers of this blog wouldn't have to have this linked to them, but you never know.

- I know this one is a little late, but do yourself a favor and check Dan Hanzus' Opening Day live blog recap.  It is, as much as it pains me to say so, better than mine.

- Brian Costello of The Post has some news that Phil Hughes found some mechanical flaws that may or may not be contributing to his diminished velocity.  That's good news, I guess.

- Costello also has a bit about the ongoing Feliciano-Mets saga, with the latest news being that Feliciano plans on challenging Dan Warthen to a cage match at Wrestlemania 28.  While I appreciate Pedro's enthusiasm, he should probably worry about getting healthy and out on the mound before he starts cutting backstage promos with Mean Gene.

- And to cap it all off, here's a quick video of Alex Oriakhi absolutely dominating the Harlem Shake before UConn's game against Kentucky over the weekend.

I did the exact same thing last night after the Huskies beat Butler.  Enjoy the rest of your workdays, people, and get ready for another woodshed beating at The Stadium tonight.  Hopefully Carsten got the issue with his parachute pants resolved.
Posted by Unknown at 12:42 PM No comments:

A couple of early 2-run homers, some solid starting pitching, and a lockdown 7th-9th inning performance by the 2011 Nasty Boys gets the Yanks another win against the Twins last night.

Particularly impressive was the season debut of Ivan Nova.  In 6 innings, he allowed 3 earned runs on 6 hits and 1 walk, and struck out 3.  He was efficient, throwing 83 pitches through his 6 innings of work, and showed the confidence and maturity on the mound his second and third time through a lineup, something that escaped him last season, after running into trouble in the 4th and 5th innings.  With the Twins closing in, he got Joe Mauer to ground out on a curveball in the 5th and then struck out Jim Thome in the 6th to keep the lead intact.  He wasn't dominating, but he didn't have to be and didn't try to be.  Nova's 5 swing strikes weren't as important as the 20 strikes that were put in play by the Twins.  He trusted his defense, kept the ball down in the zone, and pitched to contact, particularly ground ball contact (11 ground ball outs to 4 fly ball outs).  I'll take that 25 hours a day, 8 days a week.

6 quality innings from Ivan Nova, giving the team what they needed after a loss and picking up the lackluster performance from Phil Hughes the previous day.  Yes sir, just how the Yankees drew it up.  Wait, what? 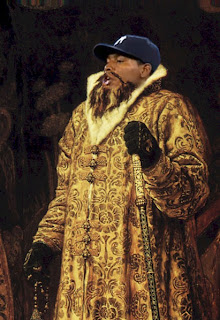 (Nova The Terrible returns.  Even though he was pretty good last night.)
Posted by Unknown at 7:44 AM No comments: