Important Award Dates For The Yankees

It's not all Cliff Lee and Derek Jeter contract drama in the offseason, people.  There are still awards to be handed out and the Yankees figure to play a big part in almost all the major categories.  Here are the biggest chances for the Yankees to bring some hardware home to the Bronx.

* Tuesday, November 9th: AL Gold Glove Awards- Robbie Cano should be a shoo-in for his first Gold Glove after a fantastic year at 2nd, and Mark Teixeira should also be the favorite for the award at 1B.  A sleeper could be Brett Gardner in LF.  He's probably going to get beat out by Carl Crawford, but their numbers stack up very well.  At the very least he'll be in the mix.

* Wednesday, November 10th: Silver Slugger Awards- This should be another cakewalk for Cano to collect this award, which would be his first.  There could be some consideration thrown the ways of Teix, A-Rod, and Swisher for their collective numbers, but with better, more productive options all around I would be surprised if any Yankee other than Cano walked away with some silver.

* Thursday, November 18th: AL Cy Young Award- I certainly wouldn't consider him the front runner, but CC is going to get some serious consideration for the award thanks to his 21 wins, high innings, and respectable ERA and WHIP numbers.  At worst, he finishes last out of the top 3 contenders (CC, King Felix, David Price).  At best, he takes the award thanks to a high number of voters who still focus too much on wins and ERA and not the sabermetrics.

* Tuesday, November 23rd: AL MVP Award- Like CC, Robbie Cano won't be considered the favorite for the award, but he stands just as good a chance as Josh Hamilton or Miguel Cabrera.  Working in his favor is his all-world production from the 2B position, not one traditionally associated with gaudy offensive numbers, and his Gold-Glove caliber defense that he played all year long (Hamilton missed some time) and did for a contending team (Detroit was out of the race ages ago).  Working against him is the fact that Hamilton and Cabrera's numbers, both the regular ones and more advanced ones, ARE better than Cano's.  In the end, I say Cano gets a few more votes than expected and finishes 2nd behind Hamilton.
Posted by Unknown at 1:46 PM No comments:

And The Great Cliff Lee Race Has Begun 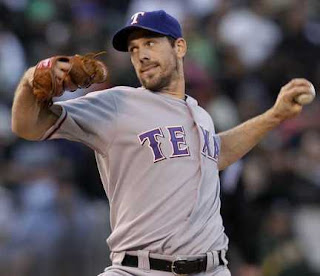 Well that didn't take long.  The Yanks contacted Lee's agent on Sunday and are planning to send their contract offer to him some time this week.

So the obvious big question, what is this offer going to be?  It's no secret that the Yankees are head over heels in love with Lee, but would they throw him a bigger offer than what they gave CC, their big man, their ace?  CC seems like a 'team first' guy, but I wouldn't blame him if he was a little chapped at the new guy in town, friend or no friend, getting a bigger deal than him when he's 2 years older and was on the losing end of their battle in the 2009 World Series and got beat twice in the 2010 World Series.

If it were up to me, I'd offer Lee a 5-year deal at $112.5 million, slightly less than the average per-year value of CC's deal, with a player option for a 6th year.  It gives Lee the biggest deal in baseball outside of CC, keeps CC happy, and more than likely knocks whatever offers the other interested teams are going to make out of the park.  The Yankees will probably go more than that, somewhere in the 6-year, $135-140 million range to make damn sure they get Lee.  Is that the right move to make?  I don't know.  All we can do now is sit and wait.
Posted by Unknown at 9:39 AM No comments: