It took a little longer than it did for McCann and Jacoby, but the Yankees finally made the Carlos Beltran signing official today.  The team formally announced the deal, which was for 3 years and $45 million in case you'd forgotten, and he will be introduced at a press conference tomorrow at 11 AM EST.

To clear a spot for Beltran on the 40-man roster, the Yankees designated Brett Marshall for assignment.  He was mostly bad as a starter in Triple-A and mop-up reliever in the Majors last year, but still has some prospect value as a young, hard-throwing pitcher.  I'm not sure why the team would elect to expose him to waivers when they could have dumped someone more expendable like Vernon Wells or David Huff, but hopefully he clears through and makes it back to Triple-A.

With Beltran in the fold, the Yanks now have a projected starting outfield of he, Ellsbury, and Gardner for 2014.  It still remains to be seen if Gardner will be traded or if the team will move forward with Soriano as the primary DH and de facto 4th outfielder, but there's plenty of time to figure that out.
Posted by Unknown at 2:06 PM No comments: 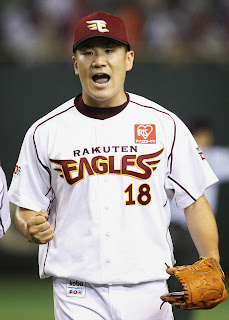 If you haven't already checked them out, Dan Szymborski released his 2014 ZiPS projections for the Yankees over at FanGraphs yesterday.  Projections, in any system, always have to be taken with a big grain of salt, but the ZiPS method has been the most accurate the last few years and is at least a decent way to gauge the team's current talent level.

Definitely click the link and peruse through in greater detail when you get the chance.  If you don't have that chance right now, here's what you need to know.  ZiPS isn't a fan of the current infield, projecting just 1.7 WAR from Mark Teixeira (in 356 PA), 0.4 from Derek Jeter (in 325 PA), and 0.2 from the newly acquired Brian Roberts (in 215 PA).  It does project Jacoby Ellsbury and Brian McCann to be the 2 best players on the team in terms of WAR (no surprise there), and also expects somewhat of a bounce back from CC Sabathia and another solid season from Ivan Nova.

There's a lot to sort through there, but it basically tells us what we already know.  The Yankees still need help everywhere.

Posted by Unknown at 7:35 AM No comments: