BAHAHAHAHAHAHAHAHA!!!  I love how even after today, Red Sox fans are still going to be talking about the last 4 years, and "we beat you in 2004, 3-0 comeback" and blah, blah, blah.  The mating call of the loser, desperate fan is referring to the past and that mating call is coming loud and clear from Boston after today.  I almost wish I was back home on the East Coast so I could soak it all in.

The fact of the matter is that this Yankee team is flat-out better than the Red Sox.  Their lineup is better, their pitching is better, their bullpen is better, they are better.  This team has the chemistry that has been lacking the last few years, and more importantly, the drive and determination to win and to not be fucked with that the teams of the late 90s had by the buttload.  Any Red Sox player or fan who thinks they are going to squeak by in the playoffs based on past history is only fooling themselves.

Dice-Gay tries to be a tough guy today and hit Jeter?  That's fine, CC hits Youk.  Boston wants to get cute later in the game and hit Melky?  Mo comes out and drills Youk again in the 9th on the 8th pitch of an at bat.  Last year's team would have sat back and let Jeter and Melky get hit without so much as buzzing anybody on Boston's tower (with the exception of Joba).  This year's team seems to fall all over each in their scramble to be the first to stand up for a teammmate and that's why they are where they are and why they are head and shoulders above the rest of their competition as the season winds down.  If their play over the last couple weeks had raised questions about that, then the last 2 have answered all of them emphatically.

Seeing this image at the end of the game today... 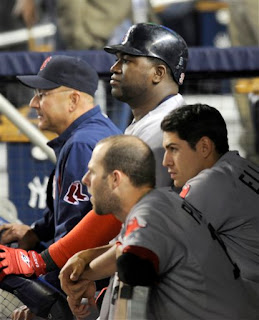 ...made my dick stand up a little bit.  I'm already planning on watching the game naked tomorrow in anticipation of the Yanks sweeping the weekend series, winning the season series, and finishing digging Boston's grave that they hopefully get to bury them in if they meet again in the ALCS.

Posted by Unknown at 7:19 PM No comments:

The Yankees basically dominate the game, Jon Lester goes down with what, at the time, looked like a potentially season-ending injury, and what is ESPN.com showing as the front page feature about the game? 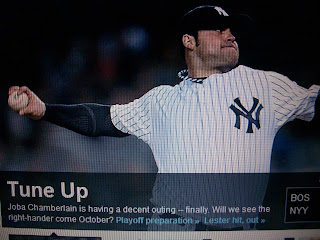 "Decent outing?"  "Finally??"  Really, ESPN?  The most important player to your favorite team in the universe just got the shit wrecked out of his knee/quad and you're busy taking jabs at Joba?  I'd like to say I'm surprised, but what else would you expect from the Worldwide Leader in Bandwagon Jumping?

They say everyone guns for you when you're on top, so maybe this is just ESPN's way of acknowledging that the Yankees are the best team.  I'm just thankful there was college and high school football on both ESPN and ESPN 2 last night, otherwise it would have been wall-to-wall coverage of Lester.