How The Hell Is The 2014 Outfield Going To Work? 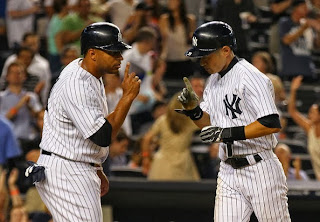 (1, or the number of wins these two have been worth this season.  Courtesy of Getty Images)

There was no shortage of heartbreaking, soul crushing, or facepalming plays in yesterday's 2-1 loss to the Giants.  Pick just about anything the Yankees did from the bottom of the 7th on and you're bound to come up with something that killed their chances to win what should have been an easy-to-win game on Mo Day.  The worst of the worst came when the Yanks were at the plate, which hardly comes as a surprise after 156 team games that have resulted in a .245/.309/.380 team batting line (.304 wOBA, 87 wRC+).

Vernon Wells and Ichiro Suzuki striking out with 2 men on and 1 out in the bottom of the 7th, while not the worst, was certainly on the medal stand of piss poor offensive moments yesterday.  To not even make contact in those at-bats and put the ball in play was the latest slap in the face example of how poorly the front office's plans for cutting payroll and remaining competitive were conceived.  Wells and Ichiro haven't just been bad at the plate this year, they've been terrible.  They're both coming back next year, as part of an outfield that could be even worse than the 2013 edition.

Not The Way Andy Should Have Gone Out 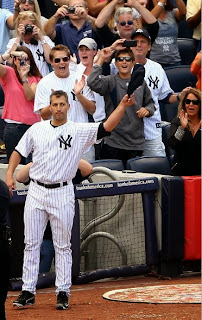 I got nothing this morning, gang.  I'm still bummed about the way yesterday's game went down.  I know I shouldn't be.  If anything, I should have expected the Yankees to lose in the fashion they did because it's what they've done all year long.  Sure, there have been a few flashes of offensive competency here and there, but overall this has been a painfully bad offensive team incapable of doing anything - get a hit, put the ball in play, make contact - when they really needed to and they saved the worst for last yesterday.  The fairytale ending was laid out for them from about the 5th inning on and they gagged on their chance to write it time and time again.
Read more »
Posted by Unknown at 11:30 AM No comments:

BREAKING: CC Done For The Season

And the hits just keep on coming.  Via Dan Barbarisi, the Yankees announced that CC Sabathia suffered a Grade 2 strain of his left hamstring in his last start against San Francisco on Friday night and will be shut down for the remainder of the season.

Guess that throws Joe's rotation realignment plan out the window and it looks like Phil Hughes will get one more start in Yankee Stadium this week.  This puts a fittingly disappointing end to an incredibly disappointing season for CC.  On the positive side, he can rest up, get healthy, and get to work on adjusting his delivery for next season.  The injury is expected to take 8 weeks to heal, so hopefully it doesn't throw his offseason workout/throwing program off too much.

The Yankees have their last scheduled off-day of the regular season today, and in a move that's ultimately too little too late but still the right strategic decision, Joe is going to use that off-day to rearrange his rotation.

The Phil Hughes-David Huff 2-headed 5th starter monster was scheduled to start tomorrow's series opener against the Tampa Bay Rays.  With the off-day keeping the rest of the rotation behind them on regular rest, Joe will skip over his 5th starters and go back to the top of the rotation.  He'll have 3 of his 4 best starters - Hiroki Kuroda, CC Sabathia, and Ivan Nova - start the 3 games against Tampa and push Huffes back to the final series in Houston later in the week.

In a perfect world, Joe would have Andy Pettitte in that mix, probably in place of CC.  Pettitte was brilliant yesterday and should have the adrenaline flowing again when he makes his final career start.  The Yankees' only chance to make the postseason is to sweep these 3 games from Tampa and get a lot of help, something that doesn't seem very likely given the agonizingly inconsistent nature of their lineup right now.  So with the season all but over, it's probably better to keep Andy on his regular schedule and let him make his final start in the other MLB city he called home.  Even without him, the decision to go Hirok, CC, Nova is the right one and an upgrade over letting Hughes and Huff pitch a meaningful game.