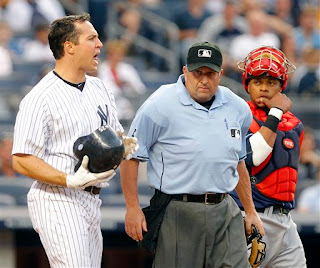 (HELLOOOOOOOOOOO!!! Courtesy of The AP)﻿
Thank you, Fausto.  Thank you for dragging the Yankees out of the zombified state they've been in for the last handful of days after enduring another asswhooping at the hands of the Fraud Sawx.  Thank you for reigniting a fire within the offense that had seemingly been blown out, had a bucket of water dumped over it, and then covered in sand since about halfway through Wednesday night's game.  It was only one game, and sure, the Yanks could come out tonight and lay another egg, but it was good to see guys fired up again, it was good to see the lineup be patient and then string hits together to make pitchers pay for making bad pitches, and it was good to see home runs get knocked into the deepest parts of the park.

And thank you, Fausto, for waking Joe up.  Tt was especially good to see that he still has a pulse there in the dugout.  He's been just as MIA as the rest of his club lately, still clinging to the "we gotta make plays/one game at a time/come out tomorrow" cliche rope as the performance and health around him has been faltering.  It's a manager's job to get his guys ready to play and to keep them up, and you could hear in Teix's voice in his postgame interview that he was fired up after watching Joe go face-to-face with Manny Acta.  Hopefully that energy is still there in the clubhouse today and hopefully it carries through the rest of the series.

And thanks, Fausto, for giving Ivan Nova such an easy situation in which to work on fixing his issues and throwing strikes in a low-leverage situation to build some confidence.  2 runs and a season-high 6 Ks in 7 strong innings?  That's as good a performance as Nova has had all year, and he probably earned himself another 2 starts at least in the rotation as the Yankees continue to wait for Phil Hughes to return.

So thank you, Fausto.  Thank you for waking the sleeping giant, even if it was just for one night.  If they're all still awake and still remember your shenanigans from last night when they get to The Stadium today, then I feel bad for your starting pitcher today.
Posted by Unknown at 9:43 AM No comments: