It's been a while since I've had the pleasure (displeasure?) of ripping the ESPN NY crew for their blatant stupidity and shameless trolling for pageviews, and even longer since I've done it to Wallace Matthews.  Luckily for me he was generous enough to throw his hat in the moral ivory tower ring that everybody is clamoring to get into in regards to this year's Baseball HOF voting.

By the time you get a chance to read this post, this year's HOF class will have been announced, and it's almost certain that nobody will be inducted, certainly not anybody from the large group of first-time eligible players from the "Steroids Era."  Everybody knows who the names are, and anybody with half a brain knows that guys like Bonds and Clemens should be in regardless of their PED connections.  Not old Wally, though.  He's using this year's vote as a way to teach a lesson to those players and pretty much all of us about morality and how that's the most important criterion for determining HOF worth.  The whole steaming pile of garbage can be found here, and after the jump are the lowlights.
Read more »
Posted by Unknown at 1:33 PM 4 comments: 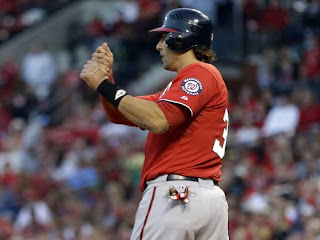 (Dude can even hit without a bat.  Courtesy of the AP)

Justin Upton he ain't, but with the news coming yesterday that the Nationals had re-signed Adam LaRoche to a 2-year deal, Michael Morse suddenly became very available and the trade winds are already blowing strong connecting the Yankees to him.  Cash is still on the hunt for more right-handed power, with Matt Diaz not fitting the description and Russ Canzler's ability yet to be determined, and Morse would be a serious upgrade over both of them.  He would cost the Yankees more in return than just money, but it's not like the Yankees are short on trade chips this offseason.  Morse would be a great piece to add to the middle-to-bottom third of the lineup and would give Joe more flexibility to move guys around if he wanted to play the L/R matchup game.  This is a trade that needs to happen.