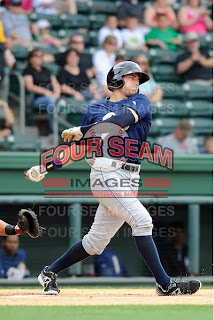 Sorting Through The Collection Of Platoon Candidates At Third Base

Conventional wisdom had the Yankees using the announcement of the A-Rod suspension decision as the springboard towards finding another established third baseman to replace him.  A decent chunk of that conventional wisdom had Mark Reynolds' name as the one most likely to be signed next as part of a L/R platoon.  Turns out none of that wisdom was correct, at least not according to what we've heard over the last 2 days.  Ken Rosenthal reported on Sunday that the Yanks were not going to add any more third base candidates on Major League deals this offseason, and assistant GM Billy Eppler and Joe Girardi both echoed that report in so many words yesterday in separate interviews.

The plan, according to Eppler and Joe, is to head to camp with what they've got and sort out who they think the best guys for the job are there.  Eppler didn't completely close the door on the idea of bringing in another warm body, saying "“Our eyes are always going to stay open.  We’ll look left, we’ll look right, we’ll look under rocks and see if something can work itself out and make sense."  He also didn't make it sound like adding another guy was a high priority, which is somewhat surprising given the limited upside of many of the current internal candidates.

The New A-Rod Lawsuit Is No Joke

If you're going to burn every bridge, you might as well soak them in lighter fluid and fire a flamethrower at them to make sure every last bit turns to ash, right?  The full lawsuit filed by Alex Rodriguez's lawyers yesterday is available to the public and it doesn't pull any punches.  My favorite passage might be this one about the MLBPA:

" MLBPA determined early on that it did not want to "take on" MLB over the alleged use of PES by Mr. Rodriguez and, instead, would "save its fire" for other issues where it would be across the table from MLB.  As a result, it engaged in numerous acts that were arbitrary, capricious and taken in bad faith, each of which constitutes a breach of MLBPA's duty of fair representation, and each of which had undermined the entire Grievance process to Mr. Rodriguez's detriment."

Arbitrary, capricious, and in taken in bad faith?  That's dynamite stuff.  Jackie Chiles couldn't have said it better himself.