Checking In On The Mets' Offseason

The Yankees are taking a penny-pinching approach to their offseason, the Fraud Sawx are busy bringing back the soul of their organization and seeing what other coaches are available in trades.  What's going on with the Mets?  Sounds like they're about ready to start opening lemonade stands and turning tricks in the Citi Field parking lots to pay their players, according to Matthew Pouliot of Hardball Talk and WSJ writer Michael Salfino: 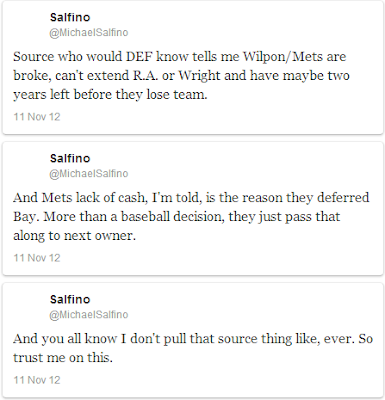 Normally this is the part in the post where I say something derogatory about the Mets and the Wilpons and then make a pitch for the Yankees to make a call about David Wright, but I know that's not worth my time from a comedic or baseball standpoint since this is almost too easy a target and Hank and Hal aren't in the business of making the team better this offseason if it hurts their chances of filling their own pockets in 2014.  So instead I'll just say, "fucking Mets."

But seriously, Cash.  You should put a call in to check on Wright's availability.
Posted by Unknown at 5:20 PM No comments:

Payroll restrictions or not, the Yankees are going to have to get involved in the free agent market this offseason to address their areas of need and finish out their roster to take another run at title 28 next season. They've already lost some major parts of the 2012 roster and they're going to have to get creative to fill those holes and build a roster capable of contending for a championship.

Yesterday I presented my list of position players I felt made the most sense for the Yankees to go after this offeason, some of whom would fit the team's cost cutting goals and some who wouldn't but were good fits in terms of addressing team needs.  Today we'll take a look at the group of players in the bigger area of need, pitching.  The Yankee rotation has 2 open spots right now, 3 if you think they aren't going to guarantee Ivan Nova a spot heading into next season, and they could use some depth in the bullpen to cover for the loss of Rafael Soriano and the uncertainty surrounding Mariano Rivera's return from injury.  They need to spend money to adequately address these openings, but as with the position players their approach will be dictated by their future payroll plans and their desire to keep costs and years committed to a minimum. 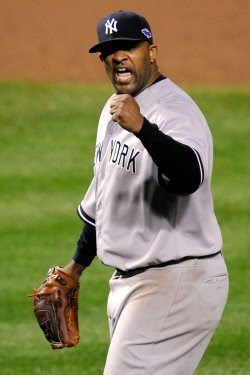 Pitching limits are a tricky thing.  People are either in support of them as a way to lessen the stress on a pitcher's arm and reduce risk of injury or vehemently against them because they don't allow a pitcher to build up the arm strength needed to make it through a full season without getting hurt, with very little gray area in between.  Typically these debates are had in reference to young pitchers making the transition to the Majors, but the Yankees stoked the debate fire last week when they brought up the idea of reducing the workload for their ace, CC Sabathia.  Sabathia is coming off a season dotted with DL stints that saw him pitch fewer regular season innings (200.0) and make fewer regular season starts (28) than he has since 2006, and is fresh off surgery to clean bone spurs out of his pitching elbow.  Not surprisingly, Sabathia stated last week that he was against the idea of limiting his workload moving forward, but there may be some merit to the idea.
Read more »
Posted by Unknown at 9:08 AM No comments: