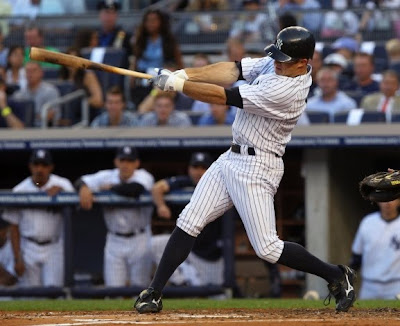 (Photo courtesy of The AP)
Upon first glance at that title, you're probably inclined to say "fuck no!" and ask what I've been smoking.  But if you really stop and look at what Gardner has done so far this year, it's worth taking a second to think about it.  Observe Gardner's stat line so far:
Those numbers put Gardner in the top 10 in 4 major offensive statistical categories in the AL.  He's currently 9th in batting average, 10th in on-base, 5th in runs scored, and tied for 3rd in stolen bases.  Not too shabby for a guy who went into the season with plenty of people, some within his own organization, questioning whether or not he was capable of being a full-time Major League player.  And within these great numbers is proof that Gardner is more than able to handle left-handed pitching, something that was a major concern for the Yankees.  His tripleslash against lefties this season is .295/.371/.410.

But All-Star selection is about more than just good stats and exceeding expectations, and selections are based on position, so Gardner has to be looked at against his fellow outfielders to truly determine if he's worthy.  Luckily for Gardner, his numbers look even better when stacked up against the rest of the AL outfield.
No matter how you cut it, Gardner has been one of the top 10, if not one of the top 5 outfielders in the AL this year.  And he's done it with just 202 at-bats, which is anywhere from 20 to 60 fewer than his major competitors.  Who knows?  Give him those 50-60 more and we may be talking about the AL outfield leader in average, runs, steals, and OBP.

And as if that wasn't enough, Gardner has played stellar outfield defense this season, splitting his time between left and center and making the transition back and forth between the two look seamless.  He has made only 1 error on the season, which was made on a shitty throw home in the season opener against Boston, and has a perfect fielding percentage in center field.  Sure, his UZR ratings are both in the slight negatives this year for both OF spots, but UZR is a funky stat anyway that doesn't take a lot of other factors into account.  The bottom line is, Brett Gardner has played Gold Glove-caliber defense to go along with his excellent all-around offense.

It's doubtful Gardner will get a nod to the All-Star Game, even with his manager calling the shots to fill out the roster.  But the case can certainly be made and Joe certainly could make a solid argument for including one more of his guys.  Jeter, Cano, and Mo are shoo-ins, Swish should be there, and Pettitte and Hughes will most likely make the team unless they fall apart over the next month.  That's 6 Yankees right there, and although 7 from one team would be a lot, it's not unheard of.  Usually the best team at the break has the most representation, and if the Yankees continue to play the way they have and Gardner keeps putting up the numbers he has, he's got a legitimate case to be included as the 5th or 6th All-Star outfielder.
Posted by Unknown at 4:03 PM No comments:

More quality stuff from around the Yankee blogosphere.  As usual, all of it is better than my slop.

- Joe Paw at RAB looks at Frankie Cervelli's jaw-dropping numbers with RISP this season.  447/.500/.553 is an incredible triple slash for ANYBODY in baseball, especially somebody who was always considered not enough of a stick to play every day in the Majors.  It must be the helmet.

- LoHud has some details on Yankee first-round pick Cito Culver and his decision to skip on his commitment to Maryland.  No word on whether or not this move will affect Jeter's contract negotiations.

- 2 pieces from TYU regarding All-Star selections, one good and one bad:

- Stephen R. rains on Andy Pettitte's parade by arguing that Pettitte doesn't deserve an All-Star selection.  Come on, dude!  Really?!?!  Don't get me wrong, I like sabermetrics as much as the next guy, but that's not what the All-Star game is about.  It's about giving props for a job well done and giving fans who they want to see.  And when a 38-year-old guy is rocking it with the best young arms in the game, he deserves to be there no matter what his xFIP is.

- On the other side of the All-Star poo-pooing coin is Chris H. pleading with Yankee fans to not vote for Teix.  Now this I can get on board with.  Teix has been awful and pretty much every stat you can think of supports that.  I'd rather he use the All-Star break to get his shit together.

- Rob at BBD has some good stuff on the resurgence of Andrew Brackman and Dellin Betances.  Sure these guys are still a long ways away from being "serious" prospects, but it is encouraging to see these 2 monsters putting up the big numbers many people thought they were capable of.

- Last but not least, el duque from It Is High... poses a pretty reasonable question after the way last night's game went.

It's Wednesday, people.  And it's already half over.  That's good news.
Posted by Unknown at 11:32 AM No comments: 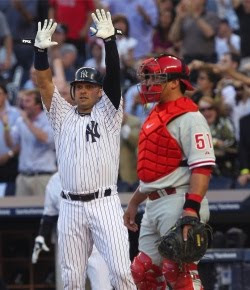 Last night was Philly's best chance to get a win in this series and they got absolutely smashed.  Now they have to hope and pray that Kyle Kendrick and Jamie Moyer don't continue to pitch as horribly as they have this season, otherwise they can kiss any hope of revenge goodbye with the weekly garbage.
Posted by Unknown at 7:53 AM No comments: