Back Of The Rotation Becoming An Oxymoron Situation

It seems all my blogging and suggesting and hoping and praying, to both forces of Heaven and Hell, for some younger guys to get a real shot at making the Yankee rotation out of Spring Training has already done no good as Joe has all but narrowed down the ST battle for the final 2 rotation spots to 4 guys.  LoHud has all the details in this post, which made me want to throw up my dinner and then knock on the door across the hall in my apartment building so I could slap the 3-year-old girl that lives there.

The biggest thing I took from this post can be summed up in this sentence from the post itself:

"... but for the most part this appears to be an open competition between four guys."

Does that statement not make sense to anybody else but me?  Is this a "jumbo shrimp" situation?  "Open competition" between 4 guys?  THAT'S NOT OPEN!!!!

Before I delve into the stupidity of Joe making that decision, let's first examine the phrase "open competition," key word being "open."  Open implies that the competition in question will welcome all participants, in this case the participants being all of the pitchers in camp right now, be they current Major Leaguers, former Major Leaguers, Triple-A guys, Double-A guys, free agents, guys acquired through trade, and all pitchers invited to camp, roster or non-roster.  To say that an "open competition" is limited to 4 select people is, in fact, a completely un-open competition.  It is a competition by invite only, and if you aren't one of the lucky 4 to find the Willy Wonka golden ticket in your locker then you're SOL, friend-o.  In short, a competition that limits the number of participants who can participate and then automatically selects the 4 participants before the competition actually begins is not open at all.

Now that that's out of the way, let's take a look at the candidates, shall we?  And the nominees are... Ivan Nova, Sergio Mitre, Freddy Garcia, and Bartolo Colon.

Don't get me wrong, I've gone on the record on this blog and in comments sections across the blogosphere as being OK with Nova and Mitre getting the spots out of camp, with the understanding that it is practically a scientific fact that neither would be making a season's worth of starts in those roles.  But to include Garcia and Colon as the other 2 options and completely shut out everybody else is just completely fucking stupid.  It's not fair to guys like Hector Noesi and David Phelps and not in the best interests of the Yankees and the chances for their 2011 success.  It's a sign of somebody still thinking in an "old school" mentality when it comes to pitchers.  I mean, look at some of these statements by Joe from the LoHud post:

On Garcia- "I’ve seen Freddy pitch against us a couple times and have a pretty good understanding of what he likes to do to us."

Yeah, that's great and all, Joe.  BUT HE WON'T BE PITCHING AGAINST YOU NOW!!!!  HE'LL BE PITCHING FOR YOU, WHICH MEANS HOWEVER HE PITCHED AGAINST YOU IN THE PAST IS IRRELEVANT!!!  Seriously, this is the same stupid logic that inspired the Yankees to sign A.J.  How can the Yankees be repeating this with a guy who's worse than him?

On Colon- "Not pitching in 18 months, how many innings could you expect from him? I’m not quite sure.”

Forget 18 months, look at the past few years and answer your own question.  Answer: Not many.  How many can you expect from Noesi or Phelps or, if they impress in camp, Mitchell, Brackman, or Warren?  More than you'd get from Colon.  So why not include them in the competition???

"The Bartolo Colon that I knew, that I saw pitch, had outstanding command."

Yeah, Joe.  I knew that guy too.  And that was 6 years, 40 pounds, and a dozen-ish injuries ago.  The 2011 Bartolo Colon doesn't even look like he could make it up a flight of stairs without stopping for oxygen and a 5-Dollar Footlong halfway up. 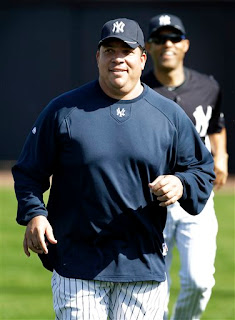 (Photo courtesy of The AP, although I wish they wouldn't have taken it)﻿
Look at the guy's damn boobs!  Look at them!  I don't know whether to throw up or just crop out the face part of the picture and rub one out.  Bartolo Colon is flat out DONE.  D-U-N.  He's a low-risk, high-reward option for the rotation because of his contract, and anything positive the Yankees do get out of him as a part of the rotation is gravy, but that doesn't mean he should get the nod over younger, healthier, more in shape pitchers who will almost assuredly give the Yankees more innings than he will.  I can understand Joe being loyal to guys on his team because of history since he's been skipper, but when you're showing loyalty to new players with whom you have no history based on what they did years ago, that's just asinine!

I'm not saying I think Noesi and Phelps, or anybody else who dazzles in ST, should automatically be handed the spot in the rotation.  But I am saying that it's a stupid, nearsighted baseball decision to eliminate those guys before they even have a chance to prove themselves.  Forgetting about the other young guys, in Noesi and Phelps the Yankees have 2 young pitchers who, because of their work in the Minors, would not have any issues with innings limits in 2011, would be less of any injury risk in 2011, and based on 2011 projections, would come close to approximating the value provided by Garcia a/o Colon in 2011 with the potential to outperform their competitors and their projections because of their stuff, their youth, and the fact that no team in the league will have a book on them yet.

Now in all likelihood this decision by the Yankees comes from more sources than just Joe.  But when you think about it, that's an even scarier thought.  For a team that has devoted so much over the last couple years to rebuilding their farm system, it just doesn't add up that they wouldn't want to give the guys they've drafted, signed, coached, and built up a chance to show what they can do at the Major League level, especially before they've even really had a chance to show anything.  If they aren't going to try to package these guys in a trade and they aren't going to give them a chance to earn a spot in the rotation, then what are they here for?
Posted by Unknown at 7:16 PM

So next year the Yankees can have Noesi, Phelps, Mitchell, Warren, Brackman, Betances, and Banuelos all competing for 1-3 spots in the rotation? All without any kind of significant MLB experience to draw from?

Wouldn't you rather see what some of them can do this year so you know what you're working with when next year rolls around?

yes because if noesi, phelps, warren et al don't come right out of ST pitching for the big league club that automatically means none of them will see a single inning in the big show. with the bottom of our rotation looking the way it is we are almost certain to see a couple of them at some point, and they won't have to wait until september. get a fucking clue and stop being so dramatic.

I just like seeing the best 25-man roster put together, one that gives the team the best chance to win every day.

If that means Noesi over Garcia right out of ST then so be it. The best man should win the job regardless of age or experience.