I don't know if that was his evil twin or an impostor in his uniform tonight, or if Felix Hernandez was really that awful.  All I know is the defending AL Cy Young Award winner, and owner of the Yankee lineup, got his fucking dick kicked in tonight.  9 hits and 6 ER is more than Hernandez allows over 3-4 starts against the Yankees and tonight he gave it up in 6 innings.

So I don't know how or why it happened.  But it did.  And that can only mean the Yankee bats are starting to wake up.  And that's more reason for David Ortiz to panic.
Posted by Unknown at 11:20 PM No comments:

We are all well aware that the Yankees, for whatever reason or possibly multiple reasons, haven't been playing great baseball lately.  They've looked slow, sluggish, and sloppy over the last week and yesterday's come-from-behind win saved them from a bona fide losing streak.  But here's the best part.  They haven't lost a single game of their division lead during that time.  In fact, with yesterday's win the Yanks actually increased their lead over 2nd place in the AL East to 3.5 games, 4 in the loss column.

And why/how did that happen, you might ask?  Because the Bahhston Fraud Sawx, despite all they-ah hahht and grit, have quietly put on a bed-shitting performance over the last 2 weeks that rivals the big dump they took back in April to open the season.  I'm talking 5 losses in a row, 10 out of 13, including a weekend sweep at the hands of the Rays to pull them that much further away from the Yankees at the top of the division and that much closer to Tampa in the battle for the Wild Card.

And it's been a 5-alarm meltdown on all fronts for the Sawx.  We're talking guys in the lineup hitting the DL (Youkilis), guys in the lineup not playing well (Pedroia), the bullpen completely falling apart, Josh Beckett getting hurt, Tim Wakefield continuing to be old, John Lackey continuing to suck.  The rotation injuries are so bad right now that the Sawx started somebody named Kyle Weiland on Saturday.  I don't even know who the hell Kyle Weiland is, and I'm pretty sure Terry Francona didn't know either.  Predictably, he got shelled, Daniel Bard blew another lead, and then Jon Lester went out yesterday and got slapped around worse than he ever has.  It's downright boner-inducing how bad the Sawx are right now, and the timing couldn't have been better.

The Yankees showed signs of awakening during yesterday's game, and hopefully started to shift the momentum back their way with the victory.  The Sawx are still in a downward spiral and have so far shown no signs of being able to pull out of it.  They're slumping, they're hurt, and now they're in a fight for the Wild Card that could get very interesting depending on how their final 4 games with Tampa plays out.  This means they won't have the luxury of resting guys down the stretch who need it.  They might be running Beckett out there on a bum ankle to bail them out, they have no choice but to run John Lackey out there because every other starting pitcher is laid up in the hospital.

When Big Sloppi has gone from telling reporters to fuck off and flipping his bat after every meaningless home run to saying this in the postgame interview:

You know it's good times.  I'd rather it didn't happen, but the Yankees picked a hell of a time to have a slump.  And if they can keep yesterday's good vibes going and get back on the winning track this week, the AL race could be over by the time we leave work on Friday afternoon. 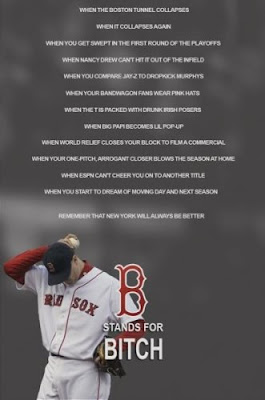 (quote courtesy of Bahhston dawt cawm)
Posted by Unknown at 12:31 PM No comments: