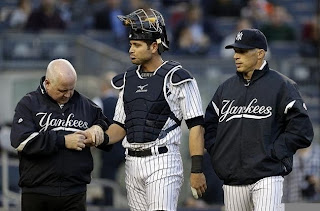 This Offense Is Offensive: Part II 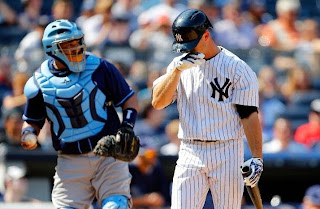 Those are the Yankee runs/game splits for each month of the season to date.  Things are what they are with respect to the injuries and the offseason and the bad contracts and the suspensions, but the bottom line is this team has sucked offensively since the calendar turned to May.  It's right there in the numbers - not even up for debate like people have made it out to be the past few seasons - and each passing day it looks more and more like they're going to miss the postseason because of it.

The Yankees have scored 16 runs in their last 7 games, never scoring more than 3 in any of those 7 games.  They haven't scored more than 3 in 10 of their last 12 games overall and 12 of the 17 games since the All Star break.  This is a lineup that was supposed to be getting better with the returns of C-Grand and A-Rod and the addition of Soriano.  Instead it's barely putting 2 runs a game on the board this month.  That's unfathomably bad.  I don't know what else to say about that.  It's wild.

Good News On The Bad News About Pineda & Phelps

The dual diagnoses are in for the double dose of injury setbacks that have left the Yankee rotation paper thin and I guess you'd say they're both positive considering the alternatives, even if they put both players' returns this season in jeopardy.

David Phelps has another strain in his already strained right forearm.  He was scratched from his MiL start on Saturday with elbow pain and there was concern that problems had spread to the elbow.  He'll be completely shut down for 2 weeks and then start throwing again.  My guess is the team will take it slow with him when he restarts a throwing program and we won't see him until late September if at all.

The tests and MRI on Michael Pineda's shoulder all came back clean.  You'll remember that he made his start on Saturday but left after 2 innings due to shoulder stiffness.  The plan for him is to rest him 7-10 days, re-evaluate, and then see how he feels.  With the team already limiting his innings/pitch count in the final months of the season, I wouldn't expect much from him the rest of the way.

Sucks that each player will be unavailable during a time when they could help the team, but at least they aren't going to have to miss any serious time because of major elbow or shoulder problems.  That's a fair trade.

P.S.- Cash confirmed that Vidal Nuno is out for the rest of the year too.  Balls.
Posted by Unknown at 9:32 AM No comments: 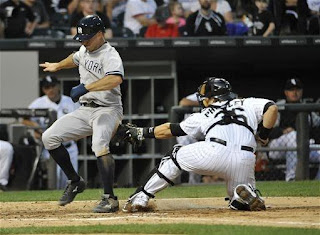