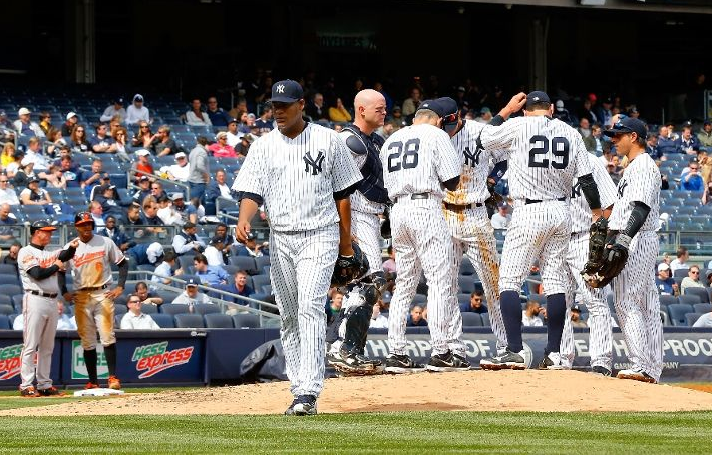 I'm not even going to waste my time or yours with an intro to this recap.  This game was ugly.  U-G-L-Y and not an alibi to be found anywhere.  The first true stinker of the season.

- Ivan Nova was on the hill again and he was even worse than he was in his first start.  He gave up 3 runs in the top of the 1st on 2 singles, 1 of which came on a potential double play ball that turned into a base hit thanks to Derek Jeter's horrible range, and a 2-run bomb by Adam Jones and the O's were off and running.

- A Carlos Beltran RBI double in the bottom of the 1st was negated by a Jonathan Schoop RBI double in the 2nd, and Nova really put the game away in the 4th when he gave up 4 singles in 5 batters and got charged with 3 more runs without finishing the inning.

- The good news from this game is that Alfonso Soriano seems to be coming around.  He led off the bottom of the 4th with a solo home run to make it a 7-2 deficit.  He also doubled in the 9th.

- The rest of the Yankee scoring came in the 4th on another ribbie double for Yangervis Solarte and a groundout by Brett Gardner, and in the 8th on a garbage time solo shot by Kelly Johnson.

- Cesar Cabral came in after Nova, but it was Vidal Nuno who really took one for the team in relief.  He got touched up for 7 more runs on 8 hits and 2 BB in 3.1 innings of work.  At least it gave all the guys from last night a day of rest. 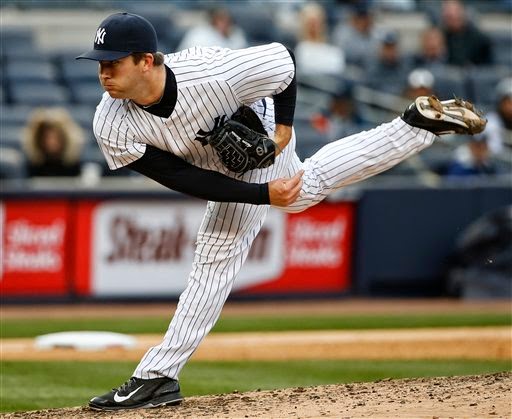 Gas face... Courtesy of the AP)

I guess that's what we get for being on the right side of the injury luck coin in Spring Training, huh?  After making it through March almost completely unscathed, the Yankees have now lost 2 key players as a result of last weekend's series in Toronto.  On Friday night, it was Mark Teixeira straining his hamstring and heading to the 15-day DL.  On Sunday night, David Robertson joined him when he strained his groin.  The team officially announced his DL trip yesterday afternoon, creating more stir in an already very new and unsettled bullpen and giving the Yanks another early-season obstacle to overcome.

There was a lot of stuff happening late in the day and early in the night yesterday.  I was a little preoccupied with UConn winning the national championship (again), so I didn't get to all of it.  Here's a quick recap of the big late day stories:

- Obviously the biggest was D-Rob heading to the DL with a Grade I groin strain.  He says he doesn't expect to miss much more time than the 15 days.  Cesar Cabral has been called up to take his place on the active roster.

- The Yanks managed to get something for the recently DFA'd Eduardo Nunez when they traded him to Minnesota for 20-year-old lefty A-ball pitcher Miguel Sulbaran.  Sulbaran is small with what scouts have generally called "average" stuff, so he's no high-ceiling prospect.  But he's a lefty who can start and the Yanks have been good about working with pitchers like that recently.

- The official diagnosis came in on Mark Teixeira's hamstring after a morning MRI and it's also a Grade I.  Teix was hopeful to be out for close to the minimum 15 days as well.  We'll see.