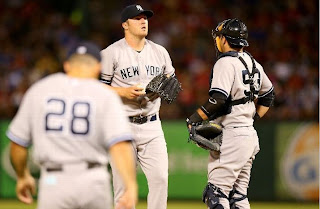 The main talking point from last night's game, besides the obvious one of how awesome a win it was, was Joe's decision to go to the hook quickly with Phil Hughes in the 6th inning.  With 2 outs, a runner on 1st, a 1-run lead, and Hughes at only 80 pitches, Joe had seen enough and went to Boone Logan to face lefty-hitting Mitch Moreland.  Moreland hit the second pitch he saw from Logan for a 2-run homer to deep center and the lead was blown, setting up the eventual 9th inning dramatics.

Personally, I think Joe made a bad call yanking Hughes and going to Logan when he did.  To me it was a classic case of the matchup binder winning out over what was happening on the field, and I thought the situation on the field gave Hughes (and Joe) enough wiggle room to allow him to face Moreland and take one more shot at ending an inning that should have already been over.  At the same time, I can understand why Joe made the move.  Hughes had given up 2 consecutive hits on balls up in the zone, he hadn't been all that sharp, and if Hughes gives up one more hit to blow the lead everybody is going to be killing Joe today for not going to the 'pen.  It was a lose-lose situation for him either way and unfortunately the decision he made turned out to be the wrong one.
Read more »
Posted by Unknown at 3:30 PM No comments:

Yanks Taking The "Innings Management" Approach With Michael Pineda. Why Didn't I See This Coming?

A small scare went up last night after Michael Pineda was removed from his latest Triple-A start after just 3 innings.  They were 3 solid innings, with no runs allowed, 3 hits, and 3 strikeouts, and his pitch count was only at 39.  After stating that they wanted to give him more time to stretch out his pitch count, Pineda was done after not even half of that count.  Not a good look.  Any possibility of an injury was quickly shot down by Brian Cashman's explanation that "innings management" was the reason for the early exit.

Of course.  After saying for over a month that I expected Pineda to come back (when he was fully ready) and be immediately inserted into the rotation, I never once considered the possibility of the Yankees actually taking the cautious approach I suggested way back in September of last year.  It's become the new flavor of the month branch-off of the modern "limiting the workload of young pitchers" school of thought, and looking at Pineda and his situation with the Yankees from 30,000 feet, it actually makes a lot of sense.

On Monday, we were told that Derek Jeter had been standing in a batter's box tracking pitches while guys threw their bullpen sessions.  Not exactly a strong indicator that he was going to be ready to come off the DL on Saturday when he's eligible or that he was even close to returning.  However, yesterday's pregame activities brought much better news as Jeter reportedly hit, took ground balls, and ran in the field during team batting practice.

From not moving and not even swinging a bat to basically full baseball activities in just a few days?  Sounds like it could be another push to get Jeter back on the field as quickly as possible.  You'd think the Yankees would have learned their lesson on that approach by now, but I guess at this point there's really nothing to lose.  It's 100 games into the season and I'm a firm believer that Jeter is going to be bothered by nagging little injuries like this quad strain from here on out.

The team has been getting some contributions from Nunez and Lillibridge lately but they could still use an upgrade.  Jeter can be that upgrade whenever he's cleared to play again so they might as well play him.  If he gets hurt again, at least they've got better backups available than what was there while Nunez was hurt. 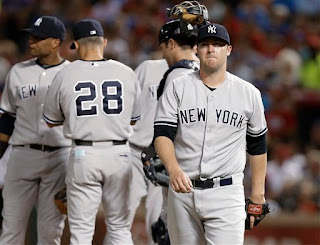 (Phil be bummin'.  Courtesy of the AP)

Blowing leads sucks.  Always has, always will.  It sucks even more when it happens this season because the Yankee offense is so weak it really can't be counted on to make a comeback.  Comeback wins are awesome, especially when they're on the road and in the 9th inning.  The Yankees haven't gotten to experience too many of those games this season due to the aforementioned offensive weakness.  Well Yankee fans got a little taste of both last night, in one of those games that makes you want to fold the tent on the season and one of those wins that leave you with just a little bit of hope that somehow this group can turn it around and make one more run.

- Nice little 2-run inning for the Yankees in the top of the 3rd, started by Melky Mesa and Austin Romine's back-to-back doubles to lead off the inning.  Ichiro chipped in with an RBI single for the other run.

- They tacked on another in the 4th with some of the smallest smallball you can play.  Leadoff double by Vernon Wells, moved to 3rd on a sac fly, scores on a fielder's choice.  Yankee baseball, ladies and gentlemen!

- Phil Hughes avoided early trouble with a pair of inning-ending double plays and was generally OK through 5 innings.  He put a few guys on here and there but made pitches to get out of trouble.  That's usually a good sign with him.

- Whatever was working for him through 5 fell apart in the bottom of the 6th.  After a Brent Lillibridge error, Hughes gave up an RBI double to Adrian Beltre and an RBI single to Elvis Andrus on pitches left up in the zone, and then just like that his night was over.

- Hughes was only at 80 pitches, but Joe didn't like what he saw and went to Boone  Logan to face Mitch Moreland.  Nobody liked what they saw after Moreland hit the second pitch he saw from Logan for a 2-run homer to give the Rangers the lead.  Really no explanation or justification for Joe's decision there.  He blew it.

- Somehow, someway, after being retired 15 batters straight since the 4th, the Yankee offense managed to come back in the top of the 9th.  Wells got it started with a walk, moved to second on a Joe Nathan wild pitch, and scored on an Eduardo Nunez RBI triple to tie it.  Lillibridge followed up with a single and it was Mo time.