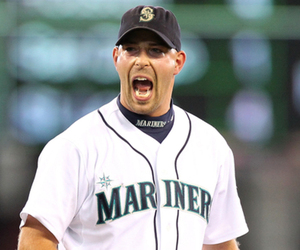 (He looks happy to be here.  Courtesy of Getty Images)﻿
In a bit of swerve earlier today, the Yankees signed right-handed reliever David Aardsma to a one-year Major League contract worth $500,000 with a team option for 2013.

Aardsma, like Joba, is rehabbing from summer 2011 TJS and currently about a month or so behind Joba on his road to recovery.  He's primarily a fastball-slider pitcher with a career 4.20/4.24/4.49 slash in 265.2 career IP, and when he's on he has legit swing and miss stuff (career 9.08 K/9).  But Aardsma also has a bit of Rick Vaughn in him and can walk the yard at a moment's notice; his command improved a bit in 2009 and 2010 when he was with Seattle, but his career 5.05 BB/9 is still a bit scary.  With where he's at in his rehab Aardsma will be heading straight to the 60-Day DL, so nobody will have to be kicked off 40-Man Island to make room for him.

The addition of Aardsma is a solid move for the Yankees for both this year and next.  It's unlikely that he will be ready to go until late summer, but when he is healthy and able to pitch Aardsma can basically be the equivalent of a trade deadline bullpen addition that the Yankees are almost always in the market for at that time of year.  And with the team option for 2013 they can bring him back to help fill the void left by Mo's retirement and Soriano's potential opt out after this season.  Aardsma was pretty damn good with Seattle from 09-10, so he could be a very valuable piece to have if he can regain that form.  And a very cheap valuable piece at six figures.

It's way too early to call, but this could turn out to be another "diamond in the rough" move by Ninja Cash.
Posted by Unknown at 5:04 PM No comments:

Baseball America released its top 100 prospects yesterday and the Yankees were well represented by the usual suspects.  Manny Banuelos was ranked 29th, right in the same neighborhood where Keith Law and Kevin Goldstein ranked him, and was followed by Dellin Betances at 63, Gary Sanchez at 81, and Mason Williams at 85.

Banuelos is the clear cut #1 Yankee prospect, but the other three guys fluctuate in their standing depending on whose list you're referencing.  Based on all three being ranked in the lower half of the top 100, it appears Baseball America has more tempered opinions on Betances, Sanchez, and Williams than other, but it's still a strong showing for the Yankees to put four in the top 100 after trading away their #1.
Posted by Unknown at 7:13 AM No comments: