The details of this story are still coming in, and there are differing accounts, but multiple sources are reporting that Mariano Rivera was carted off the field during batting practice tonight with what appeared to be a very severe injury to his right knee.

According to Dan Barbarisi, Mo put no weight on his right leg upon entering the team clubhouse.  It's too early to speculate on the exact injury, but early indications are not positive.

** UPDATE- 6:41PM- Apparently there is video of the injury that people have seen.  Multiple Yankee beat writers tweeting that his right knee buckled while reaching for a flyball. **

** UPDATE- 6:50PM- The YES team all reporting that Mo leaped to make a catch near the warning track, buckled the knee on landing, and went down immediately.  Sounds eerily similar to the Derrick Rose injury. **

** UPDATE- Friday, 6:17AM- It was confirmed late last night that Mo suffered a torn right ACL and meniscus.  It hasn't been officially stated, but it's almost certain that this will end Mo's 2012 season and possibly his career. Sad. **
Posted by Unknown at 6:34 PM 1 comment:

The Rotation Is Killing Me, Smalls

For once, it looked like the Yankees were in a position to prove the old adage of "you can never have too much pitching" wrong. It was late in Spring Training and they had no less than 10 guys who could make a legitimate claim to being worthy of a spot in their 2012 starting rotation. Some were younger, some were old, some threw harder than others, and some were just plain better than others, but this season certainly appeared as though it was going to be one, the first one in a while, where the struggles and question marks in the rotation were not going to dominate the headlines in the local press. 4 weeks into the season and all of that depth and talent has been wiped away, replaced by the same concerns over guys not pitching up to the level they were expected to and the same questions surrounding the depth of the group moving forward. The Yankee rotation has a 5.89/4.65/3.74 slash line right now, the ERA ranking 2nd to last in Major League Baseball and the FIP ranking 26th, and have only 6 games where they've pitched 7 innings or more combined. It wasn't supposed to be like this.

CC Sabathia, outside of a few misplaced fastballs up in the zone in his first 2 starts, has been the CC Sabathia we've seen over the past 3 seasons, and a look at his peripherals makes one very confident that he could become even better than his usual self as the weather continues to warm up. But beyond him and his spot at the top, the rest of the rotation is once again a sea of unknowns. 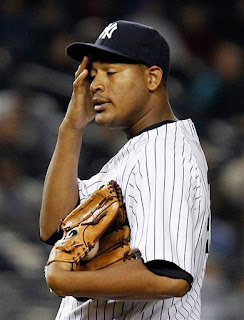 Ivan Nova's inconsistency in the strike zone finally came back to bite him last time out.  His stuff has been good since day 1 this season, but to truly take the next step towards being a legit #2-#3 starter he needs to tighten up his command.  Last night's start against Jake Arrieta could have been the next step towards that, but it ended up just being Nova running in place.

- If Nova's bases-loaded K to end the top of the 1st was any indication, we were in for another one of his "load 'em up, shut 'em down"-type adventures.

- And great guy that he is, Ivan didn't let us down.  Through 6 innings he had allowed 7 hits and given up 3 walks, but only 2 ER.  He had thrown 99 pitches and missed up in the zone with regularity again, but he had held Baltimore to just 2-11 with RISP.  The only 1-2-3 inning he had was the 3rd, but he had his team in a winning position.  It was vintage Nova.

- The only problem was that the Yankee offense, as they did the night before, just plain forgot to show up.  Through 6 innings they managed only 4 base hits and no walks against Baltimore starter Jake Arrieta, who to his credit worked them brilliantly.  He pounded the strike zone with fastballs to get ahead in the count, and mixed sinkers, sliders, and curveballs down in the zone as out pitches.

- Nova really had to labor through his 6 innings of work.  That, combined with the fact that he had plenty of guys available in the bullpen, made it a bit odd to see Joe let Nova start the 7th inning.  After getting one out, it became very clear that Joe made the wrong call as Nova gave up a homer-HBP-double trio in 11 pitches to turn a 2-0 deficit into a 4-0 deficit.

- The fact that Nova was left in to face Matt Wieters, who had already homered off of him in the game and looked very comfortable against him at the plate night, after just giving up the homer and the HBP in the 7th, and at 107 pitches, is absolutely mind-numbing.

- Arrieta's dominance continued right through the 8th after he retired 6 in a row following a leadoff single in the 7th, 3 of them via strikeout.  He gave up just 5 hits, ZERO walks, and struck out a career-high 9 in what was probably his best career outing to date.

- Freddy Garcia made his first appearance since losing his rotation spot, pitching 2 scoreless innings in the 8th and 9th.  With 3 baserunners allowed, they were hardly clean, but with the game 5-0 Baltimore it hardly mattered.