Mark Teixeira's Ready To Lay Down Some Bunts. Wait, What? 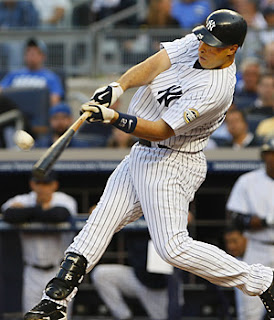 (Now THAT'S a good looking swing!)
Mark Teck-SHARE-uh's struggles as a lefty last season are well-documented.  Teix himself even owned up to the problems that have crept into his swing as he started to consciously attack the short porch in right field, and he vowed to work this offseason to fix the mechanical mistakes and get back to being the type of well-rounded hitter he was in 2009.  But dropping down bunts to beat the defensive shift?  That might be a little extreme.  Teix did have this to say on the topic at the Thurman Munson Awards Dinner last night:

“I’ve been so against it my entire career, (but) I might lay down some bunts.  If I can lay down a few bunts, beat the shift a little more the other way, then I’m right where I need to be.”

I'm all for working at balancing his swing and approach at the plate back out to improve as a hitter.  But taking the approach of actively looking to bunt to beat the shift would be just as detrimental to Teix and his role in the lineup as his shitty left-handed splits were last year.  Teix is a power hitter in a run-producing spot in the lineup.  His goal shouldn't be to just beat the shift, it should be to drive in as many runs as possible in run-producing situations.  Bunting down the third baseline really doesn't fit into that goal.

Let's not forget that it wasn't very long ago that Teix was a .300/.400/.550-caliber hitter with well above-average L/R splits. He's not some crummy L/R platoon guy at the end of his career who is just looking for a way to stay relevant; he's 31 years old, in his physical prime, and based on his track record, an elite all-around hitter.  His focus should be getting back to that level of elite production or as close to it as possible to maximize his value as a run-producing bat in the middle of the lineup, and any efforts made by him or the Yankees to do anything other than that are selling him short.

If he wants to try to lay down a bunt here or there in Spring Training, whatever.  But when it counts, I want Teix up there, be it from the right or left side, looking to drive the ball to all fields and bring baserunners home.
Posted by Unknown at 12:00 PM No comments:

Yanks Moving And Shaking In The Front Office

It started with the story of Jim Hendry's signing breaking earlier in the day and finished up with the Yankees officially announcing a bunch of front office promotions.  Real quick, here's the list:

I haven't read any specifics, but I imagine these new positions come with some nice perks.  A little extra salary, end-of-the-year bonuses, preferred parking spots at The Stadium, and in Eppler's case, probably more than that.  He did very well for himself interviewing for other GM positions out there this offseason, finishing 2nd to Jerry DiPoto for the Angels' job, and could be settling in as the heir apparent to Cash.  Plus he's a UConn School of Business grad like me, so clearly Eppler is a talented cat.  If I were him, I would have pushed for a calzone for lunch every day and a new desk big enough to sleep under.