This has all come out in the last 20 minutesor so, but apparently the Yankees and free agent outfielder Jacoby Ellsbury have agreed to a 7-year deal.

Jon Heyman first reported that the 2 sides were close, and it has since been confirmed by Mark Feinsand that it's a done deal pending a physical.  No specifics on the dollar amount but Feinsand says it will be bigger than Carl Crawford's 7/$142 million deal with Boston a few years back.

I honestly don't know what to say here.  I didn't see this coming and I don't think anybody did.  More on the story as it comes out.

** UPDATE 7:44 PM- Multiple Yankee beat guys confirming Heyman's report that the deal is close but still not done.  Feinsand now saying it's 7 years/$153 million.  This is shocking to say the least. **

** UPDATE 7:54 PM- Via Joel Sherman, the Yankees have stated that they have no intention of trading Brett Gardner.  If that's true, they'll have a hell of a defensive outfield. **

** UPDATE 8:04 PM- Via Bryan Hoch, there is an option for an 8th year that could bring the total value of the deal to $169 mil.  I imagine that's for AAV/payroll purposes but I still don't like it. **

The Yankees have issued the formal statement, so I guess that means everything checked out with the physical and Brian McCann is now officially the 37th current member of the roster and the starting catcher for the 2014 season.  As part of the team's official statement, Hal Steinbrenner had this to say:

“The singular and unwavering desire of this organization is to construct a team each and every season designed to play meaningful baseball deep into October.  In Brian McCann, we feel we have made a significant improvement to a key position, while adding a high-character presence to our clubhouse. Our work this offseason has just begun, but we feel this is an important step towards what will be an exciting and rewarding 2014 season for our fans.”

Big, bold words that match up with what the team has been saying for a while and doing since the green flag dropped on this offseason.  I said after the deal was signed that I thought this was a great move for the Yankees for multiple reasons.  They've added an elite catcher for a reasonable amount of years at market value and will have the added benefit of extending his career thanks to the DH spot in the American League.  Looking forward to McCann's introductory presser on Thursday and finding out what number he'll wear. 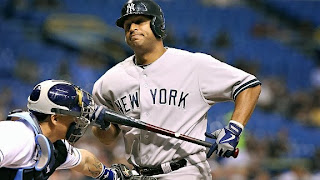 So a lot of stuff happened yesterday afternoon and last night that I didn't get to.  If you were busy like I was, here's what you missed.

- The Yankees non-tendered Jayson Nix, Matt Daley, and David Adams to free up 3 more spots on the 40-man roster.  I bet they'll try to re-sign all of them to MiL deals, but Adams is the only one I'd care about getting back.

- They did sign Russ Canzler to a MiL deal, giving him a second go-round after cutting him in February.  I did a piece on Canzler way back when they first signed him in January and he still profiles as that same type of player.  Has always hit lefties in the Minors and can play some corner IF/OF.

- Brendan Ryan's new deal was formally announced by the team.  Via Joel Sherman, the deal is actually worth $2 million this year and next year with a team option for 2016.  If the Yankees decline, it becomes a $1 million player option, bringing the AAV of the deal to $1.67 mil.  Every little bit helps.