A.J.'s Spring Training Off To A Good Start 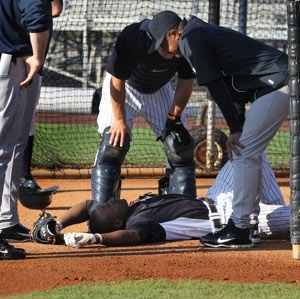 "Fright invaded Yankees camp yesterday when A.J. Burnett hit Greg Golson in the head during a morning batting-practice session on a back field at George M. Steinbrenner Field in Tampa.

Golson went down and stayed on the ground. Eventually he was taken off the field on a cart. The outfielder was taken for tests, which were negative."

Looks like the offseason meetings and work with Larry Rothschild is already starting to pay dividends, huh?

In all seriousness, I'm sure this was just a freak accident.  But when you're a guy coming into this year under a bigger microscope than anybody on the pitching staff and with much bigger expectations to improve upon 2010 because of the current rotation situation, this is not how you want to start things off if you're A.J.  Anybody else does this and it's no big deal.  But since it's A.J., it becomes a story and an opportunity for the MSM to bring up his past failures again.  For a guy who's already shown he can be is a mental midget, KO'ing your teammate in BP isn't exactly a good way to get some positive vibes and confidence going. 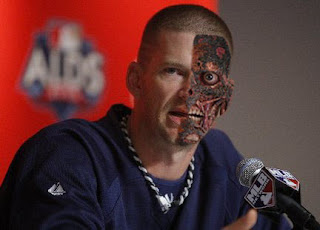 It's getting a little late in the game to put this off any longer, and with Spring Training in full swing now I'm starting to run out of time to be able to use the "Offseason Space Filler Post" tag.  So while I could sit here and comment on every early-2000s former All Star in camp on a Minor League deal and how he's performing so far, I think I'll just leave that to the blogs that actually care and instead take another trip down memory lane.

Many of you remember November's award-winning 2-part series on my most hated Yankees of all-time.  If you don't, first of all shame on you for that, and second of all you can check out Part I and Part Deux before diving into this lovefest right here.  All caught up?  Good.  Now let's take a look at some players who actually put a smile or 2 on my face during their time in pinstripes.  And remember, I'm focusing on players from the era in which I have lived and followed the Yankees, otherwise we'd just be looking at another Babe Ruth, Mickey Mantle, Lou Gehrig, Joe DiMaggio list.

10) Orlando Hernandez- I don't care how old he actually was when the Yankees first got him in '98 or how old he actually is today.  This guy was money as a Yankee and was the first Yankee free agent signing that I remember being legitimately excited about.  I also remember practically crapping myself at a card show when I stumbled upon a couple of his Bowman rookie cards for cheap.  Sure, they weren't the Chrome edition, which might actually still be worth a little, but that wasn't the point.  The point was this was the hottest new pitcher on the market, the Yankees had him, and I had a piece of him.

There was something special about watching El Duque pitch.  His windup, insanely high leg kick, and changing arm angles always made you wonder what kind of pitch was actually going to leave his hand when he let go of the ball.  His '98 and '99 seasons were his best, but even as AL hitters started to figure him out, he still managed to be effective and had a nice comeback season in 2004 after missing the entire '03 season.  Perhaps the best, and most memorable, thing about El Duque was his postseason success. He had an almost Mo-like calmness and quiet intensity on the mound, and nowhere was that more evident than in the postseason.

When you add everything up, El Duque was awesome because of all the mystery surrounding him.  The circumstances of his defection, his actual age, the number of different arm angles and pitches he used, and the ridiculous leg kick all added up to make him a sort of cult hero amongst Yankee fans during that late 90s-early 2000s time period.  And I bought into all of it hook, line, and sinker.  In fact, I probably would have been more excited to see El Duque's dusty ass in camp this ST than any other FA pitcher.

9) Tino Martinez- He had the unenviable task of having to come in and replace Donnie Baseball after the '95 season.  He had the even more difficult task of trying to win over the rabid Yankee fanbase, who had worshipped Donnie over his career, and so Constantino Martinez joined the Yankees in 1996 with a bit of a hill to climb.  All he did over the next 6 seasons in the Bronx was play in 5 World Series, win 4 of them, finish 2nd in the 1997 AL MVP race, and put together 5 seasons of 28+ HR, 105+ RBI, and .800+ OPS baseball, effectively winning over the tough Yankee crowd.  Add in the first pitch, 2-run homer in the 9th of Game 4 of the '01 World Series and, while not making the fans completely forget Mattingly, Tino's performance while in a Yankee uniform certainly made Donnie Baseball a distant memory.

Thinking back to the good old days of '96-'01, I think my favorite thing about Tino was how he went about his business on the baseball field.  On a team with all kinds of characters (David Wells, Paul O'Neill), mega stars (Derek Jeter, Roger Clemens, Mo), and other interesting stories (El Duque, Darryl Strawberry), Tino always flew under the radar, quietly doing his job, putting up monster numbers, and doing things to help the team win.  He had a reputation as a fierce competitor, a loyal teammate, and a clubhouse leaders, best emphasized by how quickly and viciously his teammates defended him in their ugly brawl with the Orioles in '98 after Armando Benitez drilled Tino in the back with a fastball.  But Tino always projected the image of a calm, collected, consummate professional who only cared about winning.  Every team needs players like this to help build the structure for winning, and Tino was the perfect piece for that foundation, representing everything that was right about the Yankees during those dynasty years and everything that was wrong about them after he left.

Even when he came back in '05 for his final season, a shell of the player he was in his prime, it was impossible not to root for and respect Tino, for what he did for the team and the way he played the game.  Even in retirement he remains connected to the Yankees, as a ST instructor and as of last year, a color commentator on YES.  Tino loves being a Yankee and being part of the Yankee organization, and I love him for it.