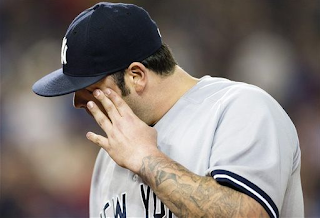 After all you've done this year to keep this team in sight of the playoffs, you put the season in Joba Chamberlain's hands?  Joba's??  Joba's.

I don't even have anything I can write that can describe how little sense that makes, Joe.  It defies explanation.  There is no explanation for it.  It was the exact opposite of what you did the night before quick hooking D-Rob and it rendered that decision meaningless.  I thought you did a hell of a job this season, you've made me a fan.  But it's going to take a while to try to figure out what that was tonight.

Do The Yankees Even Want D-Rob To Close Next Year? 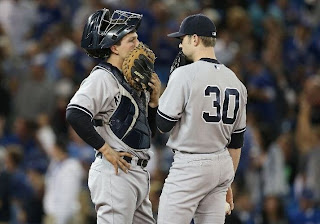 With 2 outs and a runner on second in the 8th, Joe came out to remove D-Rob and go to Mo.  Not only that, he came out in the middle of an at-bat after D-Rob had already thrown a pitch to yank him.  While it might not seem like much, it's another instance of Robertson not being shown a lot of faith as the heir apparent and it raises the question of whether the Yankees really do view him as Mo's successor.

Even with the win last night, it was another game of mostly non-existent offense from the Yankee lineup.  This has been the norm since they lost Brett Gardner to a strained oblique a week ago today.  They won that game against Baltimore, scoring 6 runs without Gardner, but since then their collective output has been as light as it was during the darkest offensive days of the summer.  5 games, 11 runs scored, 1-4 record.  That's not going to get it done in a playoff race regardless of how good or bad the pitching is.  We knew losing Gardner was going to be a big blow and the Yankees are feeling the sting.  They've been using Curtis Granderson in the leadoff spot since Gardner got hurt, and the results haven't been good. 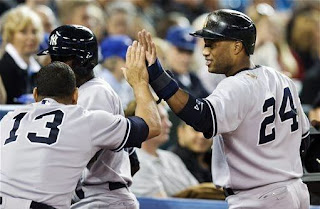 It's never a good thing when you hear or read the word "hope" repeatedly from a team struggling to win in professional sports.  After looking like dogshit all last weekend in Boston and dogshit on Tuesday night in Toronto, there was a lot of "hope" being thrown around in the Yankee locker room.  Andy Pettitte "hoped" his teammates were playing with a sense of urgency.  Alfonso Soriano "hoped" they could turn things around and start playing better last night.  When you're saying you're hoping things will happen and not saying that they will or acknowledging that you're going to make things happen, you're in big trouble.  For 7 innings last night, that hope didn't translate to anything on the field to help the team of Hughes & Huff, 5th Starters at Law.  Then the 8th inning happened and the Yankees saved their season for another day.

- It was another good half-start for Phil Hughes.  He worked around a couple of doubles through 3 scoreless frames, which is all Joe's really looking for these days, and got the hook after giving up a double and a 2-run homer Colby Rasmus in the bottom of the 4th.

- David Huff replaced Hughes and promptly gave up a solo shot to the second batter he faced to make it a 3-0 Toronto lead.  He was money from there, however, working the 5th, 6th, and 7th innings in order and recording 6 of the 9 outs via the strikeout or groundout.

- More wasted early opportunities was the name of the game for the lineup.  They stranded 2 runners in the 1st and 4th innings against J.A. Happ, then went dormant against him through the 7th to extend their scoreless innings streak in the series.

- Happ came out to start the 8th and that might have been his undoing.  He gave up a leadoff double to Brendan Ryan, got pulled, and watched as the bullpen gave up hits to 4 of the next 5 batters to blow the lead.  Vernon Wells' 2-run double was the big go-ahead hit.

- I guess Joe wasn't very hopeful that David Robertson could handle himself in the 8th.  Despite getting the first 2 outs of the inning easily, Joe pulled D-Rob in the middle of an at-bat after a single and stolen base by Rajai Davis.  He really wanted Mo.

- Mo got out of the 8th and made it interesting in the 9th by giving up singles to the first 2 batters.  But he retired the next 3 without much trouble - thanks to some smart infield defense on a bunt attempt - and preserved a big win.