Rapada Vs. Cabral For The Final Bullpen Spot- Who Ya Got?

As the roster continues to be trimmed down, it's becoming more and more clear that the competition for the final roster spot is down to Clay Rapada and Cesar Cabral for the 7th and final spot in the bullpen.  Joe has acknowledged that this is the case and said he envisions using whichever guy is chosen as the true LOOGY and making Boone Logan a general middle reliever.  So that being the situation, who makes more sense for the Yankees to take?

Both Rapada and Cabral have pitched very well this spring, and their stat lines stack up very well:

Rapada has been more consistent over the course of the spring while Cabral has come on of late, allowing 0 runs, 3 hits, and striking out 9 over 5 IP in his last 4 appearances, including an impressive 2-inning, 6 K performance against Tampa a week ago.  Where the comparisons really start to drift apart is in the L/R splits.  Rapada has been murder on lefties this spring, allowing just 1 baserunner (on a BB) and striking out 8 in 4.2 IP against left-handed hitters, but has given up more hits and more walks against righties, living up to his extreme career L/R split.  Cabral has actually been better against right-handed hitting, blanking righties over 5.2 IP while giving up the majority of his hits and all his runs allowed against lefties.  The small sample size curse could be at work here, though, as 8 of Cabral's 12 strikeouts have come against left-handed hitters.

Ultimately the decision will come down to how much upside the Yankees think Cabral has.  At 23, he is considerably younger than Rapada and conceivably could be developed into a more effective and possibly complete relief pitcher.  Rapada would be viable as a LOOGY and LOOGY alone.  With the success each has had this spring, they are very likely to get a job elsewhere if they aren't chosen, Rapada because of his MiL deal and Cabral because of his Rule 5 draft pick status, so the Yankees are going to lose whichever guy they don't pick.  I was high on Rapada earlier in camp, but I'm leaning towards Cabral now because of his youth and better performance against righties.  Having that kind of flexibility in the 'pen with Cabral and Logan makes the entire bullpen that much deeper.
Posted by Unknown at 3:30 PM No comments: 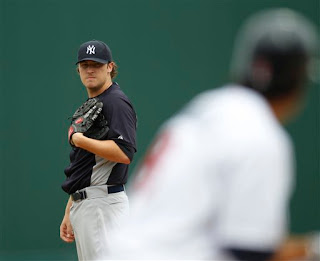 (Can this guy stay in the rotation all season?  Courtesy of The AP)﻿

The hitters have been covered, and there aren't a whole lot of new knowns or unknowns about that group as they've all been here before.  We move to the pitchers today, starting with the rotation, where there are a couple of new faces and a new old face that's returned for another go.

What We Know- There's No Shortage Of Available Bodies This Year

There's depth aplenty in the Yankee rotation in 2012.  No bargain-bin Bartolo Colon signings or hope for unproven young starters this year.  The Yankees have 7 viable, capable Major League starting pitchers on hand right now, and any combination of 5 out of that 7 has the potential to make up the best top-to-bottom rotation in baseball if they all pitch to their ceiling.  There is also a good mix of old/older veteran pitchers who know the deal and young pitchers still putting the pieces together to reach their potential and figure out exactly where their ceilings top out.  And if this group is hit by a plague of injuries, the Yankees have 3 quality arms in Triple-A they can use to plug holes in David Phelps, D.J. Mitchell, and Adam Warren.

What We Don't Know- How Much They'll All Be Used

It's already been said plenty of times this spring that too much starting pitching is a good problem to have, and it is.  But it is a problem none the less, and at some point the Yankees are going to have to deal with it.  The young guys are the most likely to take a back seat or get shuffled around, as both Ivan Nova and Michael Pineda have Triple-A options remaining and Phil Hughes has experience working out of the bullpen.  Injuries could also factor into the shuffling of the rotation deck when that time comes.  CC Sabathia is a workhorse, no doubt about it, but that workload and his size always make him a candidate for a DL trip.  The Yankees have been lucky enough to not have to deal with that so far, but you never know.  In the interest of managing workloads, the dreaded 6-man rotation is always an option as well.

As The Ankle Turns... 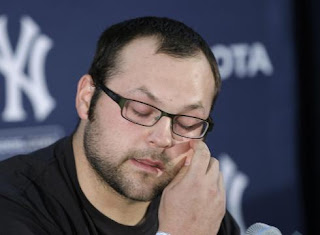 (Hipster Joba loves his son.  Courtesy of The AP)

See what I did there?  With the ankle line?  Because he dislocated it??  Pretty f'ing clever, huh?

Seriously, though, what's the deal with this Joba ankle situation now?  He's saying he didn't even dislocate it, it wasn't that bad, and he's going to pitch this year.  Cash is saying he talked to the doctors and confirmed that it was an open dislocation and it's still unknown if Joba can pitch this year.  Again, I don't have a medical degree, but it seems like something as horrific as an open dislocation of your ankle is a pretty black-and-white situation that even people outside the medical field could look at and diagnosis.  Why Joba is trying to downplay everything is very confusing to me.  The only thing I can think is that he's trying to make Cash and his doctor out to be the heels to set up a match at Wrestlemania against his doctor for the right to be medically cleared to pitch in 2012.

Actually, that would be pretty awesome.