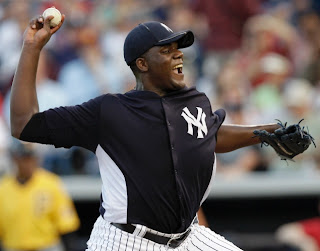 There was a surprise guest in the Yankee clubhouse before last night's game.  You might remember him as the top-flight young starter for whom the Yankees traded their top prospect, a Mr. Michael Pineda.

Chad Jennings of LoHud had the details on Pineda's return, and they included positive reports on his rehab from his labrum surgery, his apparently improved physical condition, and suggestions that he could be ready to start throwing again by September.  All of this is about as good as any news could be on Pineda, who will undoubtedly enter Spring Training 2013 as an even bigger wild card than he was this year.  I hope the plan is to give him as long as he needs to make a full recovery and be able to return to full pitching form, even if that means him missing part or all of ST or the beginning of the regular season next year.

And because we're keeping this Pineda talk positive, I'm not even going to mention how the team's winning streak was broken on the day that he showed back up in the clubhouse.
Posted by Unknown at 11:03 AM No comments: