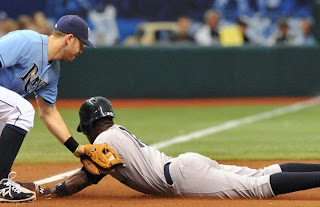 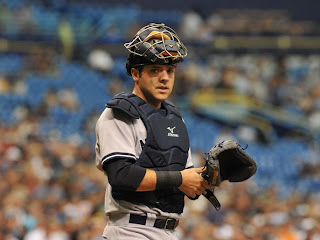 Was it just me or was Derek Jeter's return to the lineup last night not even a blip on the radar?  Other than typing his last name into the batting order, I didn't even think about him in terms of having an impact on the game.  Jeter made it easy to not be considered, going 0-3 at the plate with a walk, strikeout, and GIDP and not doing anything noteworthy defensively for better or worse.  The best thing you could say about last night is at least Jeter came through the game healthy.  That's how low the bar has been set for him.

After 3 attempted comebacks, the novelty of Jeter returning has worn off.  This entire season has been a wasted one for him - he's played more MiL rehab games than Major League games - and the bigger concern now is how this lost season and the nonstop leg issues will affect him in 2014.  Expecting Jeter to provide a boost to the team is almost empty hope at this point and that was more apparent last night than in any of his other previous comeback attempts.  If he can manage to finish the season on the field and not the DL, that's about the best we can hope for.

Posted by Unknown at 9:17 AM No comments: 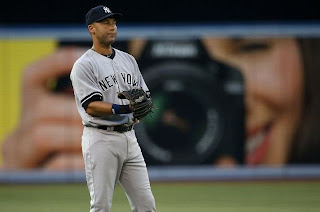 The last time the Yankees faced R.A. Dickey, he was knocking Jayson Nix out for the year with a broken hand and getting taken yard late by Alfonso Soriano to mar an otherwise stellar pitching performance.  Phil Hughes was surprisingly effective his last time out too, so in theory something had to give last night.  Derek Jeter was back in the starting lineup and back in the #2 spot in the order behind Brett Gardner, giving the Yankees arguably the best 1-9 batting order they've had all season.  Crazy to be saying that in the 131st game, but this year hasn't exactly been business as usual.  What has been business as usual is Hughes pitching poorly and he got back to that last night to get this series started off on the wrong foot.

- The Yankees smallballed their way to a run in the top of the 1st on a Brett Gardner leadoff single, a passed ball, and 2 groundouts.  They scored in a much more conventional way in the 5th on an Alex Rodriguez solo HR, his third since coming off the DL.

- In between those innings, Hughes gave up 2 runs of his own.  His command was back to its usual level, and too many runners on base (4 hits and 2 BB in 4 innings) allowed Toronto to capitalize in the 2nd and 3rd innings.

- Hughes created more trouble for himself in the bottom of the 5th, putting runners on the corners with 1 out, but it was Ichiro who really mucked things up.  For whatever reason, he mistimed his jump on a fly ball at the warning track and dropped it, allowing a run to score and runners to stay at the corners.

- Hughes never recovered from there, giving up an RBI double to the next batter and allowing another run to score on a sac fly before being removed with 2 outs in the inning for David Huff.  No leash for you!

- The Yankees tried to get something going in the late innings, putting a runner on in the 6th, 7th, and 8th and stealing more bases to get guys into scoring position.  They just couldn't come up with a hit when they needed to and went down without much of a fight.

- Give Huff credit where it's due.  He allowed just a single baserunner in 3.1 scoreless innings and struck out 5, preserving the rest of the bullpen for the rest of the week.