If you haven't figured it out already, we're ankle deep in the official AB4AR season preview, and we're not even close to complete.  Here's a look at what's coming up over the next week plus to prep for Opening Day on March 31st.

And if you're all really good and eat your vegetables, there might even be a live blog for the Opening Day.  I don't know how I'm going to do it from the office, but I'm sure I can figure out a way.  In any case, that's the plan to get everybody as ready as they can be for the 2011 Yankee Regular Season.  If you miss out on any of this, your loss.
Posted by Unknown at 6:15 PM No comments: 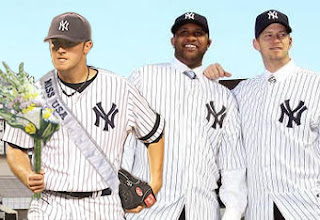 (Who else will be in this picture come March 31?)
Next up in the AB4AR "Know/Don't Know" series is the rotation, the group on the roster with the most questions and unknowns surrounding it.  But hey, at least 60% of the rotation is already set.  Right?

/looks around for nods of agreement

What We Know: He came into camp this year in better shape.

Whether it was 25 pounds, 20 pounds, or 5 pounds, there's no doubting that CC put more emphasis on physical fitness this offseason after his knee surgery.  He's the rotation's horse, he knows it, and he's trying to do everything he can to stay whole and stay healthy in 2011.

What We Don't Know: If the Yankees have a plan for him to limit his work this year.

It might not be a bad idea considering the workload Carsten has accumulated over the last 4 seasons and the fact that he is coming off surgery.  A rough pitch/innings count early in the season or in games where the Yankees are way ahead would be a good idea to keep him fresh and ready for the stretch run and the postseason.  But then again, these are the Yankees and nothing is more important than winning, and CC on the mound always gives them a better chance of winning.

Joe made it official this weekend.  Misguided or not, he has faith in A.J. after what he's seen so far in ST and he's showing confidence in A.J.'s ability to rebound from his horrific 2010 by coming out early and announcing him as the starter behind CC.

What We Don't Know: Will his offseason work with Larry Rothschild will fix him?

A.J. has talked and worked with Rothschild almost since he was announced as the new Yankee pitching coach, and the results so far have been positive.  A.J.'s new mechanics and where he's standing on the mound seem to be working, and his changeup is developing into a reliable pitch.  But when the tough times come, how will A.J. handle them?  Can he keep repeating his delivery mechanics after he throws a few bad pitches?  Can he shake it off and re-focus on the next batter?  Because that's what's going to make the difference for him between success and failure in 2011.

What We Know: The kid gloves come off this year.

No innings limitations, no lower spot in the order, no excuses.  After an All-Star 2010, Phil is going to be counted on to be the anchor of the rotation that Andy Pettitte had been the past few seasons.  He will fill an extremely important role as the 3rd starter in the rotation, expected to provide stability and high-quality innings between the sketchy A.J. and potentially shaky back end.

People raved about it in camp last year, and then it disappeared once the regular season started.  By the time we got to the end of the year, when he needed it, he didn't have it.  Hughes has put more time into improving the changeup this spring as well, but the true test is whether or not he can add it to his repertoire and implement it effectively in games.

What We Know: The team needs one.

The early leader in the clubhouse is Ivan Nova after his sterling 6-inning performance last week.  But he still hasn't locked it down and will probably need another solid start to give Joe enough confidence to declare the job his.

What We Know: See 4th Starter.

What We Know: Ditto.

Favorite- Freddy Garcia, shaky recent outings aside.  Backup- Bartolo Colon, who the team seems pretty happy with.  Darkhorse(s)- Andrew Brackman, Manny Banuelos.  There's almost no chance either one of them will get the job, but they have been impressive and the Yankees could be forced to scramble if either Garcia or Colon gets hurt in the last couple weeks.
Posted by Unknown at 1:44 PM No comments: 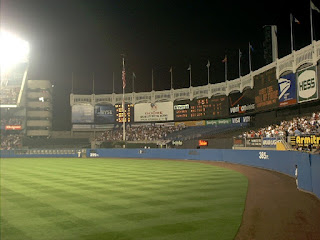 (Mind the gaps, gentlemen.)
The first of a two-part known/unknown preview to come your way today, this one involving the outfield.  If you missed the first part over the weekend, don't fret.  It's right here.  The things I do for you people.  All caught up?  Good.  Onward and upward.

What We Know: He can be an everyday player.

Gardner has almost as many questions surrounding him going into last season as the back end of the rotation does this year, and he more than held his own in the field and in the lineup as the everyday LF.  A .277/.383/.379 tripleslash and a 106 OPS+ to go alone with 47 SB and solid defense is pretty damn respectable.  And those numbers would have been better were it not for the heater he took off the wrist in the summer that sapped what little power he has in his swing.

What We Don't Know: Can he take the next step?

I'm a firm believer that Gardner can develop into a poor man's Ichiro if he stays healthy, keeps working, and develops a little more pop to his swing, and have said as much on this blog before.  He was hitting at an All-Star level before the HBP on the wrist last summer.  But there are many who think Gardner outperformed his true talent last season and will regress this year.  Gardy's got some work to do to silence the doubters.

What We Know: Last year was a disappointment.

For him and for all the fans, who were hoping for a version of C-Grand similar to the 2007-2008 model.  Instead, we got treated to a watered-down version of what he was during his last year in Detroit.  It all came to a head when Granderson was taken out of the lineup for 2 days to revamp his swing with Kevin Long.  The results of that work were noticeable, as Grandy finished the year looking much better at the plate, though still not good enough to make up for the early season struggles.

What We Don't Know: Whether he's truly turned the corner.

His hot finish to the 2010 regular season carried over to the playoffs, where C-Grand was one of the few Yankees who actually swung the bat well.  He has looked good so far in ST this year, but will need to carry that over to the regular season and show some consistency with his new hitting approach to really prove he's worth the trade the Yankees made for him.

What We Know: He has been reborn in New York.

It's obvious by now that Swish was drowning in Chicago and New York was his life preserver.  He's taken to the city and fans like a duck to water, he's added some much needed energy and looseness to the traditionally stuffy Yankee clubhouse, and he's had the 2 best years of his career in the Bronx, including a title in '09 and his first ASG appearance in '10.  Goofy as he is, Swish fits into the fabric of the team and the organization perfectly.

What We Don't Know: How much longer he'll be a Yankee.

I can't see any reason why the Yankees wouldn't bring him back, but Swish does have a $12 mil team option for 2012 that could become questionable if he regresses a bit this season.  He will turn 30 this year, and the Yankees certainly aren't interested in handing out a Jayson Werth-style contract to him.  But if Swish continues on the production trail he has blazed over the past 2 years, the Yankees will most likely offer him some kind of new deal.
Posted by Unknown at 7:33 AM No comments: